The Lesson in a Chair

I had got it wrong. The plastic bottle with the green top that I assumed was long-life semi-skimmed milk turned out to be a yoghurt drink. I thought I had the morning cup of tea sorted. There would be no urgent trip to the shop around the corner on the morning after arriving home very late at night. The gloop of yogurt that sank into cup said otherwise.

It was on the journey home that I passed by the school field. It was play time. The supervisors cannot watch every corner and things happen in some corners that don’t get seen.

There were four or five girls in the corner of the field, next to the fence, and one boy, smaller by a year or two. One of the girls kicked the boy solidly in the ankle and he cried out.

I have been on the receiving end of bullying, enough to know how unpleasant it all is and how powerless it makes a person feel. It’s a lonely experience being the bullied. I remember days of simply skipping school because I couldn’t face the confrontation. I remember the casual clipping of my desk that tipped the pencil case on to the floor. It was not the sniggers of the bullies that bothered me, but the silence and the pretending they didn’t see of the non-bullies. No one should be treated that way. The strong should not bully the weak just because they can.

With this in mind I had strong words with the girl, Abbie. I called her out as a bully. Said it made me angry that she could treat someone like that. She was eight or nine years old – bullies start young in life. I made her apologise. I threatened to speak to the headteacher of the school about her behaviour. I looked into her eyes and wanted to see shame there.

In my mind’s eye I saw a chair. A dozen or more.

I’d just come home from a week in Krakow. The city was beautiful. It hadn’t gone through all the renovations that other German occupied cities went through after the war. The buildings didn’t have a look of age that was really a recent build. They were old. We were visiting the Jewish ghetto. A pharmacy on a corner had been a place of refuge and escape as the German discrimination against the Jews grew ever more horrific. The place was now a museum. 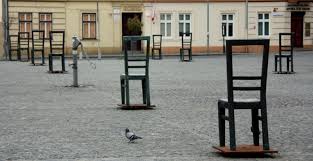 Outside, in the square, there were dozens of chairs, tall, metal, dotted around. There were other smaller chairs around the square.  When the Jews were first herded into the ghetto, which got progressively smaller as the Jewish population were transported to camps, they were not given time to take possessions. There were pictures of queues of children carrying chairs on their heads.

Inside the museum there were dozens and dozens of stories, on the walls, in drawers that you pulled out of cabinets, on screens that paired up with headphones. Sad tales. Silly tales. Anecdotes of off-the-cuff music nights and dancing in people’s homes. People trying to live a normal life as best they could, finding things to smile about when everything around them was tragic.

A note in one of the drawers was written by an eight-year-old girl, no older perhaps that Abbie, the boy kicker. I don’t know what consumes eight-year-old girls these days. Are they still into unicorns and Barbie dolls and horses? This little girl wanted to know why people were being moved again. The ghetto was being split into Ghetto A and Ghetto B, the workers in one place and the non-workers in the other. Friends and families were being pulled apart. Her father and her brothers worked. Other family members were too sick.

The chairs, the girl’s letter, Abbie kicking a boy – there was something about planets lining up.

I would really like to claim that I have never bullied anyone. Maybe I did with my words to Abbie this morning. There was a fence between us. It was the edge of the school field. Maybe all that saved Abbie from being kicked by me, and I was that cross, was the fence. But words – fences don’t stop words. My words were not gentle. Does that qualify as bullying? My own bullies never laid a hand on me. I was never kicked. But there were words. And the sound of the pencil case hitting the floor. And the feeling of isolation.
Posted by meljkerr at 2:31 pm