The conversations were about the really BIG issues in the world that needed to be addressed. The participants in the conversation were a group of young people. On a piece of scrap paper they had listed a number of issues that they believed to be important. They spent the next ten minutes defending their selection to others in the group. The intention was not just to see who was the most passionate of speakers and could persuade others to see that their issue was the BIG issue.  People tend to wear blinkers when it comes to BIG issues. They don’t always demonstrate 360 degrees of vision. They know all the details of animal experiments but know nothing about modern day slavery, or know the benefits of fairtrade but know little about the near extinction of rare butterflies. An important part of the discussion was simply to help them to take off their blinkers and see a wider spectrum of BIG issues.

My own top-of-the-list issue, had I been asked, is probably ISOLATION.

A couple of weeks ago the BBC aired a series of programmes in the morning hosted by the celebrity chef James Martin. He wasn’t wearing his chef’s hat and showing us interesting things to do with butternut squash. He had recruited a number of other celebrities, sporting personalities, TV presenters and the like, to visit the streets where they grew up and see what things had changed. While they knocked on doors and hugged people that knew them as children, James talked to people who were lonely. The loss of a wife or a husband seemed to be a common denominator. Grown up children lived the other side of the country. Next door neighbours moved out and strangers moved in and “outside” became a frightening place to be. The end of each programme was a neighbourly get together - a street party or tea at the local community centre. Under the watchful eye of the camera people connected with each other and representatives from different charities were there to point people in the right direction. 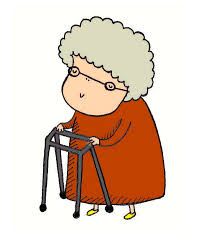 I am not sure whether it was the first or the second programme when I recognised my potential future self.  She was an old lady in her eighties or nineties. She had become isolated. She lived by herself and she rarely had visitors. She didn’t have “Meals on Wheels” because it would seem like the ultimate surrender to become dependent on someone. Asking for assistance was not the way she did things. Seeing my potential future self was so scary that I didn’t watch any more of the programmes for a week or so.

Warning bells rang! I am not in my eighties or nineties and I have time to lay down a different “old lady” path. I am not a very good joiner-in. I value my privacy. I am not gregarious. I am not the life and soul of any party – although that might not always be true. I think that sometimes I am not comfortable in my own skin and would like to crawl into someone else’s, someone with a bit of the exhibitionist in them. There are no children or grandchildren to bring new leases of life, or to live the other side of the country and not visit.
“Remember this: Whoever sows sparingly will also reap sparingly, and whoever sows generously will also reap generously.” (2 Cor 9:6) Paul might have been talking about giving and the next verse talks about God loving a cheerful giver, but giving and sowing encompasses a whole range of actions. If I rarely engage in conversations with people I have just met I am never going to reap a wider set of friends.  If I am too busy to meet someone for coffee there will come a time when they stop asking.  If all I ever do is complain about the state of the world, or the government or the weather, what kind of fruit can I expect to reap?

I am not planning a list of New Year’s resolutions. I don’t think I am even going to hunt down the Bible verse that will see me through the year, although 2 Cor 9:6 looks to be a good one.

A Facebook picture suggested seeking out a single word for the year ahead. I downloaded a book onto my Kindle – “My One Word” by Mike Ashcraft and Rachel Olsen. There is a DVD out there somewhere and course notes to run a church programme based on the one word. You're not supposed to get yourself stressed out wondering if the word you have chosen for the year is God’s word for you, or thinking there’s a better word on your list that maybe you missed.

My one word is CONNECT. I love the Latin version of it -  Contineo is defined as: to hold together, to keep together, to connect or to join. That’s my word for the year. Not a list of things – just a single word. It’s not really about the number of connections like collecting Facebook friends.  It’s about quality of them, connecting not just to other people, but to God, to nature and to the unexplored parts of me.
Contineo.

The adventure begins…
Posted by meljkerr at 6:52 pm No comments:

I am dragging words around the dance floor of the page trying to choreograph a poem. The end result is interesting. The straitjacket rules made it a challenge to write. I liked the concept of an "endangered virtue" and someone's life story written in verbs - the things that they do.

The prompt on page...no page numbers apparently - the nightmare of control freaks:-

"Write a 12 line poem whose lines begin with words that start with the letters R, V, H, O, K and E.  Use each letter twice."

Real life is this, I tell myself, as I
visit the corners of my soul
Here my heart beats strong but
out of sync with a world where
kindness is an endangered virtue
expressed so rarely by so few
Read my story written in active
verbs like love and sacrifice
His life before it was mine.  I am
opened petals unfolded before the Son
Known, not merely by surface and skin but with
every layer understood

There is a second part to the challenge:-

"Try it again, but this time make it rhyme."

Real life, not always calm and still, is

Visited by light and shade
Here daily beats the steadfast heart
Off centre in sin’s world unmade
Kindness breathes its healing air
Exhaled by those who ache to care
Read my story written now in
Verbs like love and sacrifice
His words so sweet I make them mine.
Oh never can the world entice
Known am I beneath my skin and
Every thought that dwells within

Posted by meljkerr at 8:17 pm No comments:

The Mind Provoked to Dance 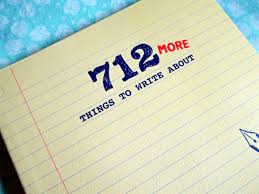 “712 More Things to Write About” by the San Francisco Writer’s Grotto provides 712 creative writing prompts to “provoke the mind to dance”.  It was on my Christmas List to Santa and he was kind enough to leave it under the Christmas tree.

Unlike the Bible it's acceptable to just turn to any page to see what the prompt is.

“People Who Mispronounce My Name”

Two people come to mind when it comes to mispronouncing my name. The first person was Kay Grant, or Kay Carver, if we are going by married names, although she was Kay Grant when she did it.  She used to call me Menanlie instead of Melanie.

My best friend and I, in our school days, went through a phase of speaking backwards.  She was Thiduj and I was Einalem for a while.

There are a lot of people that pronounce “Mel” correctly but wrongly assume that it is short for “Melissa”, but that technically doesn’t count as mispronouncing it.

You know of course, as I keep telling people, that it means “dark and mysterious.”  The dark bit is related to the Greek word for “ink”.  The mysterious bit I just add for dramatic effect.  It is a real battle not to live up to my name.  It is hard to be an open book.

The second person to mispronounce my name was me.  Not my first name, obviously.  There were no cute baby-getting-it-wrong moments when it came to me saying my name or the names of brothers and sisters, of which I had more than a few.

I suppose those times when I am giving myself a firm telling off by using my full married name – Melanie Kerr (rhyming it with fur, spur and occur) I could ignore myself on principle.
Posted by meljkerr at 10:57 pm No comments: