I tend to allow Father’s Day to pass me by. I don’t have a father, and I’m not a father and I’m not married to a father either, nor married to a man who has a father. I think that covers all bases. I know a lot of people who are fathers, and of course, I know The Father – so I’m not entirely fatherless.

Last weekend we were encouraged to bring something to share at our church meeting – a testimony, a poem, a short word – something the spirit of 1 Corinthians. It was a warm day so we sat in the garden. The kids scrabbled silently around to pick buttercups and “colour” their song sheets yellow!

With that kind of freedom, there are some people, like me, that take advantage and wax lyrical about something or other. Other people stay quiet, sometimes under the mistaken impression that what they have is not good enough.

Someone shared with me later what they planned to say, but wasn’t convinced that it was appropriate!

Did you know that Jesus was a father? Back off with the stones until I explain what sounds like heresy and some kind of approval of Dan Brown and Divinci.

Isaiah 9 opens with “The people walking in darkness have seen a great light; on those living in the land of the shadow of death a light has dawned,” (v2) and goes on to declare, “For to us a child is born, to us a son is given, and the government will be on his shoulders. And he will be called Wonderful Counselor, Mighty God, Everlasting Father, Prince of Peace.” (v6)

Yes, did you catch that phrase towards the end? Everlasting Father. Not spoken of God the Father, but of Jesus the Son.

One of the translations has it as “Father of Eternity”, and comments that the word “Father” is used in the sense of “Author”. Jesus is the Author of Eternity.

Regardless of whether you get tangled up with the creation of the world being according to Genesis, over six days and calculate the age of the earth in thousands or millions of years as opposed to hundreds and thousands of millions of years through a God directed process of evolution – Jesus was the author of it all and all that came before it. When there was nothing – Jesus was present.

That totally gets rid of BC and AD (or BCE and CE if we are being politically correct!). There isn’t a time Before Christ – because he has always existed. All time is in a sense AD because everything that is came after Jesus.

You are amazing
Truly amazing
Author of eternity
There before the world began
Before a single word was spoken
There has never been a time
Darkest night or brightest day
When you have never been there
Always, always there beside me
Amazing, amazing Lord
Posted by meljkerr at 9:18 am No comments: 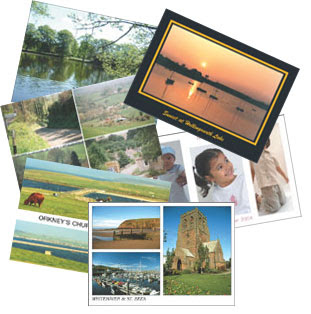 A post card arrived this morning. I don’t know anyone who is not tied into school holidays in some form or another, so the idea of anyone on holiday right now is not logical.

There are four pictuersue scenes of Woolacombe on the front and a paragraph of scrawled writing on the back. The weather apparently is mixed rain and sun but not cold and a lot of walking has been done and large ice-creams have been eaten.

It was from my sister. I know her writing and she doesn’t scrawl. I thought perhaps that someone else, my niece perhaps, or perhaps it was even the great niece who is possibly five by now and reads well, but still has to to master writing skills.

Wrong on both accounts! The last sentence reads “Two more weeks of plaster cast – hope you can decipher the scrawl.”

I have to confess that my sister’s handwriting, even with a plaster cast on the wrist, is a lot neater than some people’s “scrawl” without such an injury! I might even suggest that it is neater than my own plaster-cast-free scribble.

It also challenges me. It is so easy to allow hindrances to stop us from doing things. I think of all the things that I opt out of. Sometimes I am looking for an excuse not to do it – it is cold outside, it’s dark outside, I have a bit of a tickle in my throat and wouldn’t like to pass on my germs to anyone, I’m tired, I’ve had a hard day…and that’s without thinking hard about it.

My sister’s broken wrist doesn’t qualify as an excuse not to send a postcard. It’s not an excuse at all, but a genuine reason. But she didn’t let it stop her. She wrote the postcard in a very untidy scrawl – better that, she thought, than no card at all.

I was thinking that lately I have been making too many excuses why I can’t do some of the things that God is asking me to do. I spoke on Sunday about the “greater things” that Jesus said his followers would do.

I tell you the truth, anyone who has faith in me will do what I have been doing. He will do even greater things than these, because I am going to the Father.

I am finding some of the not-so-great things challenging enough even before I begin to think about the greater things. My faith should not in my ability to do what is asked or not, but in God’s promise that says I “will do greater things”.
Posted by meljkerr at 5:44 pm No comments:

“Thus the work on the house of God in Jerusalem came to a standstill until the second year of the reign of Darius king of Persia. Ezra” 4:24

“Now Haggai the prophet and Zechariah the prophet, a descendant of Iddo, prophesied to the Jews in Judah and Jerusalem in the name of the God of Israel, who was over them. Then Zerubbabel son of Shealtiel and Jeshua son of Jozadak set to work to rebuild the house of God in Jerusalem. And the prophets of God were with them, helping them.” Ezra 5:1

The space between these verses in feet and inches, or metres and centimetres, if you are so inclined, is very small. One chapter ends and another begins and on the page of the Bible the space is not a big one.

The space between these verses in minutes and hours, or months and years, is a big one. I think it is somewhere in the region of twenty to thirty years. The ex-exiles returning from Babylon, now living back in Jerusalem had come upon a brick wall of intimidation from their enemies. The work on the temple that they had been rebuilding had come to a standstill.

Some twenty to thirty years later, the work begins again.

The catalysts were the prophets Haggai and Zechariah. They brought the word of the Lord to the situation. It was a word that unlocked the situation and released the nation from the fears that bound them – or perhaps, in Haggai’s case, presented them with a greater fear to deal with – the fear of God – and they began building. Not only did they begin, but they kept on building even though the enemies didn’t let up, and they finished what they set out to build.

I read this a few months ago and at the time I was struck by the power of prophetic preaching. Haggai and Zechariah did not water down their messages to make them more palatable, or invited anyone to join in a debate or discussion, but spoke prophetically to the nation and where, once there had been a nation standing still, making no headway – through their ministry, things begin to happen.

It stirred my spirit.

There is a need for prophetic preachers who bring a word that doesn’t just tickle our ears, or makes us think about changing the way we live our life, but never really empowers us to do so. We need a word that compels us to change, that sticks to us and that will not fade with time.

More than this, it stirred my spirit to seek to be that prophetic preacher!
Posted by meljkerr at 7:41 pm No comments:

I remember the voice, but I don’t remember the name of the boy who owned it. Let’s call him George. It was a music concert at the school where I was teaching – a small private school. George was the smallest boy in the class, so naturally he was placed at the front – right next to the microphone the “choir” shared. He was possibly the most enthusiastic singer, definitely the loudest – and probably the least musical. He did not have that sweet soprano voice that all choirboys envy . He didn’t have a sweet anything voice. George possessed a singing voice that only his mother would love. It was painful to listen to.

I find myself very much in the same position. I am the smallest person in our “choir” and they have placed me at the front for our music concert. I don’t claim to be the most enthusiastic singer, or the loudest, but I suspect I am the one person in the choir who is singing flat and not quite hitting the notes, or holding on to them as long as should be.

The concert is in a day or two’s time, so I thought I would get in some extra practice. Just type in “I know him so well” plus “karaoke” and you get to partner the great Elaine Page on youtube. In real life she might pass me by, but in the cyber world there is no escape for her! So we sang – I took the “second” singer while she belted out the “first” singers lines.

We didn’t sound so bad. It was a little bit slower than I was used to – but that gave me time to take a few breaths along the way. It might not have graced the Albert Hall, but the neighbours were not banging on the wall.

Elaine and I were making sweet music.

So what was the problem? If Elaine and I could sing it well together – why did I sound like a strangled cat when I sang with the choir?

Firstly, the song on the karaoke site is pitched higher. Famous singers can probably sing in a whole variety of keys – that’s why they are famous singers. Maybe there are certain songs that are deliberately pitched to flatter a singer’s voice. The key at which Elaine was singing flattered my voice too! The low notes were not too low.

Secondly, my voice is probably a natural soprano, but I am singing with the altos. I was off sick, or recovering from sore throats when the choir learned the soprano harmonies. The alto part appeared to be much more straightforward. So I joined the altos.

So here I am – the smallest member of the choir – standing at the front – closest to the microphone – swinging wildly between pitch perfect and tone deaf.

I suppose I wouldn’t be the first person to mime on stage!
Posted by meljkerr at 7:48 pm No comments: