Teling Tales - Both sides of It

I’d been invited to go to a creative writing group by a man I met at a storytelling workshop. As he was just a man and not THE man who ran the class, I wasn’t sure whether I could just turn up. There might be an etiquette to these things that I didn’t know about. At a different workshop, another man who went to that same group, was not happy about the calibre of poems that won awards. He didn’t understand them. One such poem was “Thirteen Ways of Looking at a Blackbird" by Wallace Steven. The homework given was to write something similar on the topic of borders. I didn’t go to the writing group but I liked the prompt so I wrote a poem about fences. One stanza comes t mind:- 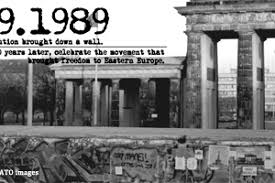 Tuesday night, the Waterfront Hotel. I picked up a brolly as dark clouds gathered. The brolly was broken and quite useless, but it seemed that just the act of carrying it would be a declaration that rain would not spill and I wouldn’t get wet. A pointless act in reality as I did get wet!

The topic for the creative writing workshop was about how to effectively write about the hot potatoes in life. The guest speaker, author and journalist Fiona Rintoul. had written a book, The Leipzig Affair.

Joe and I didn’t quite make it to Leizpig to watch Celtic FC play in a Champion’s League fixture. We stayed in Berlin and took in many tourist attractions, including the wall. There was so much sadness from the fallout from the division then into East and West. There was also so much hope and vitality from all the new buildings that filled what used to be no-man’s land.

One of Fiona’s concerns was about writing a story based on events that she hadn’t experienced. It is all too easy to pick a side based on what you think you know or what you read in books or newspapers. Part of the problem comes when you have deeply entrenched ideas and what you choose to read is the stuff that confirms rather than challenges what you think. How can you present opposing views giving them both weight?

I remember that my degree dissertation had been on the topic of the effect siblings have on the social and emotional development of a child. I was one of six children. I’d already made up my mind that brothers and sisters mattered.  I read a lot of reports and studies on both sides of the issue. Swings and roundabouts – brothers, sisters, the only child. I think I didn’t read objectively. I’d already decided and it influenced how I read and what I read.

One way of presenting both sides, in fiction, is to use dialogue. Set in in pub, two men leaning against the bar, pints in hand, putting the world to rights. Bob says one thing. Fred challenges him. A lively discussion begins and each character argues their point, gives their reasons and embellishes it with a memory, or something that cropped up in Eastenders or a newspaper article they read.

The discussion doesn’t end with Fred being won over by Bob and the readers being led to the conclusion that Bob was right. Maybe Bob’s mobile phone beeps. His wife reminds him he promised to pick up a bottle of wine on the way home. Bob slaps his forehead. He had forgotten. He’s got to go. He and Fred part company and the reader is left to make their own conclusions. It’s important, said Fiona, to not tell someone what they should believe. If people have the information – the correct information, both sides of it, rational, reasonable with the right dash of emotion, the writer is allowing them to be mature enough to draw their own conclusion. Telling the reader what to think is propaganda.

If you are doing that, presenting the discussion, airing the views and allowing the reader to decide, the quality of the information given needs to be good. The research needs to be done but not like my dissertation that was very one sided. The variety of sources is important – letters, diaries, related novels perhaps. Not everything researched needs to be used, only that which advances the story. Bob is unlikely to quote obscure historians or cite specific experiments and their conclusions. Using the research selectively matters rather than just throwing everything you have found out into the pot. Fiona admitted that she had done that. So much had to be cut out and deciding what was important and what wasn’t took time.

So there you have it:-

We had an opportunity to write something on contentious issues. The choice was between Islamaphobia and the transgender debate. Most people chose to write about the first simply because it has a history that isn’t particularly recent. Many writers prefer a bit of distance from events. A decade or two and the dust has settled and the knee-jerk response isn’t felt so keenly. Then, maybe it’s time to start writing.

Sometimes I think that being a person of faith makes the whole issue of freedom of speech and censorship that much more like a minefield. If you regard a holy book as divinely inspired and not up for debate, some issues are decided for you. Society labels something as acceptable. A holy book might not. Not everything is up for interpretation. People feel threatened and they choose to defend their ideas out of sense of fear.

One of the skills we need to pass on to our young people is how to deal respectfully and gently with those who hold views that are different from our own. Books of fiction like Fiona Rintoul’s book, “The Leipzig Affair” try to do that.

We all have to read well. And some of us have to write well.
Posted by meljkerr at 12:27 pm