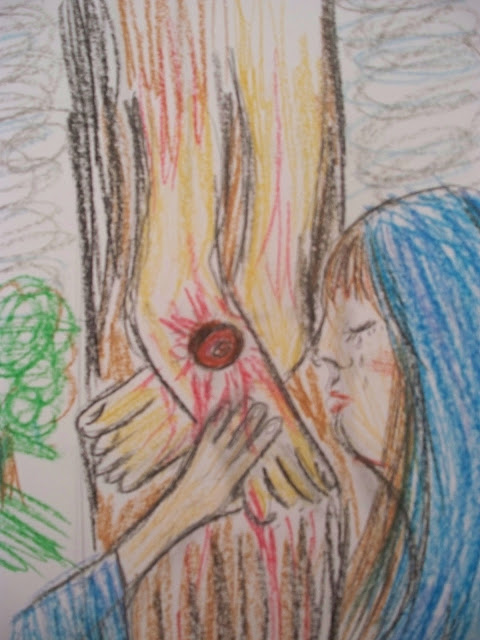 I am not an artist.  My media when it comes to anything creative is not pencils or paint but words.  I took art at school only because my best friend took art.  She was good at it and I was hopeless.  Somewhere in the mist of my memory I think I see a fibre-glass tray but I don’t think I made it.  The teacher would usually take stuff off me and do it on my behalf.  I suppose any artistic talent I had was well and truly squashed by that approach.

I was on a gospel outreach team funded my local church.  I was supposed to keep in regular contact and send updates of what I was up to.  I hadn’t discovered the poet in me at the time.  A letter every month seemed very boring.  I drew a comic strip cartoon of my days.  You can get by with a comic strip with not-so-great artistic skills. I thought it was good and church never wrote to tell me not to do it ever again so they must have been satisfied too.

One of the activities at the Quiet Day Retreat was art based.  A few months ago I went to a day’s prayer retreat on the other side of the firth.  They had a table there with all sorts of art supplies.  The expectation was that you would experiment with colour and shapes to express feelings.  Most of the people there were from traditional church backgrounds.  Drawing pictures did not feature in their pathways to God.  They gave the table a wide berth – as did I.  Memories of my art teacher taking away my paintbrush to do “it” for me came rushing back.  It was not my forte so I wrote a poem instead.

“Let’s keep it simple…” said God.  “Really, really simple…” I didn’t get any sense of Him wanting to take the pencil from my hand and do it for me.  He was not like my art teacher.

The tongue was out in fierce concentration.  The pencil scraped away on the paper.  The rubber left a grey stain with every line I erased.  I might have been unconsciously muttering to myself.

I was onto my second sheet of paper, the first having been neatly folded and put into the bin.  I wasn’t frustrated, but a little bemused.  The picture in my head and the picture forming on the paper just didn’t look the same.  The task was beyond me.

Have you ever seen the simple illustrations from the Good News Bible?  It came to mind that sweeping lines and bold colours might be the way forward rather than worrying about the shape of fingernails and wrinkles around knuckles.

It didn’t quite pass the “is-this-really-a-photo” test.  It was one step up from the Good News Bible but on another planet to Michael Angelo.  I liked it.  So the woman had a double chin and her nose looked to have been broken some time in her life, but it was the best I could do given my lack of talent.

I left it on the table after signing it at the bottom.

Once the silent part of the retreat was over, we were free to talk to people.  People re-introduced themselves.

“Mel?” asked one lady, “The artist Mel?”  Was I the person who had drawn the picture of the woman kissing Jesus’ feet at the cross?  Something about the picture touched her heart.  Not the lack of perspective or the double chin – but something beyond what could be communicated with just pencils and paints.  She was drawn to the woman, drawn to the cross, drawn to the expression on her face, drawn to a sense of stillness.

As my husband said later, once you let these things out into the world, whether it’s a poem or a picture, it ceases to be yours.  People see their own meaning in them.

Yet again, I was surprised by the unexpected.  I hadn’t planned to paint a picture but God had planned it into His day with me.