Jack Reacher, the hero of many Lee Child novels, facing a suicide bomber on a train, recognising that he is not a hostage negotiator, had this to say about himself - “Mostly I’m a very silent person.  It would be statistically very unlikely for me to die halfway through a sentence.”  Jack would probably do very nicely at a Quiet Day Retreat.

I had no worries about the silent part of the Quiet Retreat Day at Kilravock Castle yesterday.  Having said that, I have an inner chatterbox and although I might not say much, there is a conversation going on in my head – not so much a conversation as an unspoken monologue.  I like to think that God joins in the conversation when the inner me pauses.

My worries were that despite being there the whole day, with ample opportunities to connect with God, I would not really connect at all.  Everyone else, I imagined, would be having life changing encounters and I would be frittering away the day pleading with God to say something.  It didn’t happen that way at all. 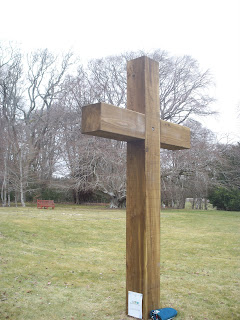 On the lawn at the front of the building is a huge cross.  It seemed fitting to begin at the cross.  It also seemed fitting to do something more than just stand beside it.  Sometimes when the spirit is not sure how to begin, the body can show the way.  I think if I had been watching me I would have muttered that I was taking it too far – I knelt down.  I also sat down and at one point lay down.  A man from reception very kindly brought me a rug as the grass was just ever so slightly damp.  What was intended to be a swift bow and acknowledgement turned out to be a much longer linger.

There’s no denying that the cross at Kilvarock will never be put to crucifixion use.  It is a very neat and tidy cross in the gentle surroundings of woodland walks and daffodils on the lawn.  There were no noisy crowds hurling insults, no soldiers with hammers and nails and no weeping mothers.  I could run my fingers up and down the wood and get no splinters.  There was no blood.  Crosses and crucifixions are so alien to our lives.  It’s all very clean and sanitised and it is almost beyond our imaginations to picture the reality of it.

I don’t know how long I had sat making all the usual connections one makes about crosses.  Had it not been a silent day I might have sung a hymn or a chorus.  I was aware that my mind was doing a lot of the work – I was thinking, rather than allowing God to speak.  I thought good stuff – but not God stuff.  Maybe that’s why I stayed so long.  My feet might have been ready to walk away, but my spirit wasn’t.

Imaginative contemplation is about reading a gospel story and imagining the scene as though it is happening at this moment and we are active participants in it.  It’s not everyone’s cup of tea but as a writer it goes with the territory.

I tried to put myself in the scene.  It was a case of closing my eyes and re-writing the sounds and smells around me to something closer to that day.  Did the birds stop singing the day Jesus died? I know the sun stopped shining.  My imagination introduced the shouts and the calls of the crowd and the soldiers.  I heard the rattle of dice or whatever it was they were using to gamble for the robes.

I pictured the scene after everyone had left.  There has to come a time when you have had enough.  If you were a teacher of the law, you would have used up all your anger and vented your spleen.  There was a sense of anti-climax perhaps.  The feeling of satisfaction you hoped to feel with Jesus disposed of is absent.  Jesus’ death hasn’t brought closure.  There’s a sense somehow that it’s not really over.

I stood beside the cross.  The only part of Jesus I could reach was his feet.  I’d perhaps heard about the woman washing Jesus feet with her tears, wiping them with her hair and pouring out perfume.  It was too late for anything like that.  I wanted to touch him, but I didn’t want to embrace the blood.  If I kissed him, I could only kiss his feet, not washed with water, but stained with blood.  Did I want to do that?  Was it safe? I mean there were still soldiers around.  Did I want to align myself with someone so utterly cursed and rejected by God?

Sometimes when the spirit is not sure how to begin, the body can show the way.  I moved as close as I could to the cross, picturing myself cradling his feet.  I too washed Jesus’ feet with my tears.

I know the end of the story.  I can’t un-know it.  I know about the resurrection.  It didn’t stop me at that moment feeling a little bereft.

I connected.e already had i
Posted by meljkerr at 7:56 pm