The Woman on the Swing

The plan for the afternoon was a walk somewhere, followed by tea and cake. I headed down to Loch Ness. The walk was through the woods beside Aldourie Castle. I’d been there before. The little book of local walks had promised a pleasant hour or so with views of Loch Ness and the opportunity to look through the gateposts at the Castle which is very Disneyesque. One can, if one has sufficient funds, rent the castle for weekends and have one’s friends staying and party late into the night without disturbing one’s neighbours. I seem to remember that the path up to the gateposts was a fight against dense undergrowth. I decided to give it a miss this time round.

Let’s talk about the tea and cake first, shall we? The hour or so was becoming much more, and I was getting hungry. The brisk pace I began with had slowed down to a dragging feet and a stumbling over tree roots kind of pace. The thought of cake kept me moving. I pictured the cake on the plate, and the taste of it on my tongue. Yes, I it was calling to me from Dores Inn.

The inn was in view. I was not quite crossing the carpark, but near enough. A tour bus pulled up and a million people, or more, poured out of the bus and into the inn. They glimpsed Loch Ness but opted for the inn first. There were millions of them in various stages of old age and carrying a lot of walking sticks between them. Apart from all the seats being taken up, I realised I’d be at the end of the queue and chances are they would, between the millions of them, polish off the cake. I wasn’t sure whether I could drive anywhere safely without consuming a cake but decided I would be home long before anyone came to take my order. A cup of tea and sensible biscuits could be consumed at home. I safely navigated my way around a rather large tractor and made it home safely. The Scottish Slimmer in me preened at the sensible biscuits.

As ever I took a notebook and pen, and a poem-writing-intention with me on the walk. I wished I had brought a pencil rather than a pen. A rubbing from the bark on a fallen log would have been creative. It looked like chinks of armour, grey and polished.

I sang as I walked, warbling through “How Great Thou Art”.

When through the woods, and forest glades I wander,
And hear the birds sing sweetly in the trees.
When I look down, from lofty mountain grandeur
And hear the brook, and feel the gentle breeze.

Then sings my soul…

There’s a wonderful poem called “The Creation” by James Weldon Johnson. I wish I knew the poem well enough to quote lines. I googled the bit I was looking for when I got home.

Then the green grass sprouted,

And the little red flowers blossomed,
The pine tree pointed his finger to the sky,
And the oak spread out his arms,
The lakes cuddled down in the hollows of the ground,
And the rivers ran down to the sea;
I was aware that my trainers were on the way out. It seemed that I could feel every contour of every stone and pebble, every prickle of every yellowed holly leaf on the path, and every curve and rim of every tree root. Thin soles. I mused for a while about the thinness of my “sole” and whether there might be a corresponding truth about the thinness of my “soul”. Did a thin soul make me feel too much the irritating spiritual pricking and prodding as I walked through my day? I was reminded about something I had written last month about nurturing a fat soul by feasting on the abundance in God’s house, and drinking from His river of delights.

The path was a mixture of trees. In some parts of the wood the trees had enough space between them to allow the sun to filter though. The forest floor was thick with green, growing things like ferns and saplings. There were birds and butterflies flitting about.  Other parts of the forest were much darker. The trees hugged closer together and the floor was thickly dusted with pine needles. Nothing grew on the forest floor. Light and space, growth and life? Or denseness and darkness, silence and pine needles? Which one best described me and my faith walk?

But it really wasn’t anything about the woodland walk that inspired me
to think about a poem – I haven’t written one yet. There is a stretch of path that leads up to a gate into the wood. The path skirts a children’s play park. There are swings and a spinning thing and a spider’s web net thing. It wasn’t there the last time I had been by that way. 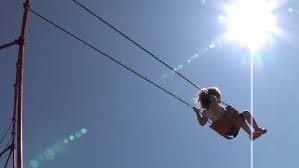 There was an old lady on the swings.  Her husband was pushing their grandson on one of them, but she occupied another. She wasn’t just sitting on it as a place to sit, but swinging. Her face was screwed up with concentration, her hands gripping the rope firmly, and she swung her legs back and forth to get the swing moving. She smiled.

At the start of the woodland path there was a tree. It was a tree that almost begs a person to climb it. The branches are low enough and thick enough and numerous enough for even the least fit person to climb it. There were no notices not to, and no warnings that you climbed it at your own risk and if you fell out of the tree you could not claim compensation from anyone – it was climbable. I imagined the woman on the swing climbing the tree!

I have a tendency to think too much about my dignity and my age.

If my faith walk is anything it’s an adventure. If I stop myself from participating fully in that adventure because I want to protect my dignity, or I’m think myself too mature for this or that – it is not just myself that I am robbing of enjoying the adventure. What am I teaching the next generation through the example I set?

I want to be embracing the adventure that is faith. I want my spirit to climb the tree, and if I fall out of it, not to be looking for compensation or someone to blame.

I want to be the woman on the swing.
Posted by meljkerr at 6:42 pm