My Narrow Stretch of Grass 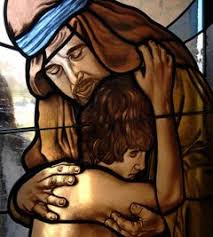 Catching up on one of the Lent readings and meditations I had missed earlier in the week, I read the Parable of the Prodigal Son.

I almost sighed and asked myself if there was anything I didn’t know about the parable. I have books and pictures of it. I have taught it to school pupils and preached it in churches. I have produced power point presentations of it and acted it out. I have written short stories and poems based on it.  I have even re-written it into text-speech to see what it might look and sound like. Over-kill and yet here it is again.

There’s not much in the parable that really relates to me on the literal level. I don’t see myself in any of the characters of the story.

I am not a parent, not a father and I have never watched my child leave home. I don’t remember much about my own father, and although I had a stepfather, his influence over me was quite limited. I was an intimidating teenager.

In the spiritual sense we are all the younger son having strayed from God and demanded our independence. In the physical sense there might have been minor rebellions but I have never left the way the younger son did. I went places – for a while I was the most travelled in the family – but I always came home for holidays and I wrote endless long letters. I have never been a phone person.

I have never been the squandering type – just ask the moths in the purse! I am not a fritterer-away of stuff. Perhaps part of that is having had so little money and knowing too much, and also too little about poverty, I like my rainy day fund and my definition of rainy days are like Noah’s flood rainy days.

If I have hit the bottom of any barrels, they haven’t been deep barrels or particularly dirty ones. I have lived too carefully and cautiously for the bad barrels to be a part of my history.

I am not a risk taker. I play it safe. And sometimes that means that I don’t really lick the lid of the yoghurt top of life. I need to not live my life on a fairly narrow stretch of grass but be part of the bigger world.

God doesn’t have another Mel. He wants the one He has to be the Mel He had in mind when he created me – not the Mel that I think is sufficient, or the world would like me to be.

The character I might come closest to might be the older son – but even then, I’m not like him either. I don’t work as hard as he does. I don’t whine about parties. I quite like younger brothers returning to the fold. Yes, there are times when I have felt passed over – a Christian friend seems to fall into a good life without any apparent struggles and I limp form crisis to crisis.

I read somewhere that the love the father expressed to the older son was not in a party of his own which he never got but in the invitation to work with him to organise and host the feast for the younger son. That was the better gift, the real honour – working with the father to throw a party.

God invites us to help him to throw a party for all the younger sons that come home.
Posted by meljkerr at 8:03 am