Last Friday I was invited to attend the Highlife Highland Learning Awards. I am a supporter of Creativity in Care and really enjoy meeting with them for Poetry in Motion most months.


One of our lads, I use the term loosely, Colin, was to collect an award and I was there to clap wildly! Well into his eighties, with a twinkle in his eye and a saucy comment on his lips, he is one of life’s enjoyers, although he can’t always remember which bits of life he has enjoyed so far. He was not able to attend because of ill health. Karrie collected the award on his behalf, taking the opportunity to read one of Colin’s poems.


There were quite a few absent award winners. Easter is the only time when the Highlands and Islands University building is available for these kinds of things.  The afternoon key speaker was a young man from Nairn – he looked schoolboy young but he wasn’t. Learning doesn’t always come in the form of a classroom and a whiteboard and projector.  Mark had done most of his important learning in various countries volunteering. He talked about making the most of opportunities that come our way. Some people would exclude themselves – they don’t have the time or the money or the imagination to make it happen. Not everything falls into your lap and sometimes you need to work hard to make things happen. What you learn in those far off places, doing things you never thought you could do, he says, changes you.  You become something better through the experience.


We should all be, as adults, learners. Last night I went to the cinema to see The Lost City of Z. Somewhere in the film, the wife of the explorer, speaking to one of her sons quoted a line from a poem by Robert Browning - “Ah, but a man's reach should exceed his grasp, or what's a heaven for?” 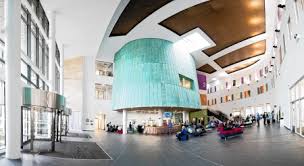 The actual building the university is housed in is a new build – but I think the architects and builders must have had Robert Browning’s poem in mind. I am not a fan of new builds. They can sometimes look quite same-ish – all windows and metal and square and anonymous. We had the opportunity to look into the way the place was built – the colours of carpets and walls mimicked nature. I work in a building of garish oranges and greens that almost hurt the eye. The UHI is subtle – soft tones like the mountains in autumn and the valleys in springtime. They took pictures, pixelated them and chose their colours carefully. The building isn’t one of sharp angles, but curves and soft lines.


In my younger days, when they built an extension on to the primary school I attended they installed a green blackboard.  The thinking at the time was that green is a comforting colour. God was there long before the education authority caught on with His green grass and green trees. The UHI building lets you feel at ease and comfortable in the learning environment.


Poetry in Motion held a workshop in the afternoon and provided us with a chance to play with poetry.


Embark on your learning journey
Step through the revolving door
Moving forwards, passing through
In and out
Lines and light