If you are not aware of it, today, 25th September, is National Dream Day. It’s a “global day of action dedicated to setting dreams in motion.” It’s not the falling-asleep kind of dream. This is not a call to stay in bed for the day – there ought to be a day for that, come to think of it. No, this is a Martin Luther King and “I have a dream” kind of day. 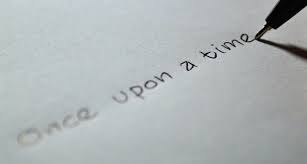 I am maybe just hours away from realising a dream. The setting it in motion happened some twenty-five years ago. Then, there might not have been a dream at all, but the foundations being built for one. Two months ago, August, was the official setting it in motion – enrolling in a creative writing degree course.

Being out of the education system for a year I no longer live according to bells, or term times, or school related deadlines. I only know when the school holidays have begun when I see kids around and wonder why they are not in school.

I had planned for a year of doing as little as possible during my first year of retirement. Doing a creative writing degree course was pencilled in for the following year. I should have got it all done and dusted much earlier than August. I was enjoying retirement too much with the knitting and the walking and the art work, and more recently with the sewing.

The application form was filled in along with a personal statement. I have never written one of those before in my life. It was just another creative writing exercise. Did it come across as a little too flippant? I’m always told that you have to write something that stands out – so I did – complete with the occasional rhyming couplet.

I heard nothing for a while and term started. I kicked myself for not getting it organised long ago. I also consoled myself. I would still write poems and pieces as before. A degree course wouldn’t change that. There were still a host of online courses to dive into.

Then there was a request for a portfolio of work. Three pieces, different genres, were reqired. I spent hours trawling through poems and short stories. Three? It’s like labelling three children as favourites when you have dozens.

I was trying to allocate a percentage to the amount of my writing that has a strong Christian theme to it. With many of them being generated for faith-based websites, the percentage was high. Finding one that was mostly secular was hard. I wasn’t about to pretend that faith doesn’t permeate much of what I do, they got a poem based on prayer. A science fiction short story and a article about equine therapy taken from my blog made up the trio. I emailed them as requested.

The next day the course tutor replied requesting an interview. I was well within walking distance of the university and doing something face to face, but a phone call was enough. Five minutes to assess whether I had what it takes – although that did morph into over half an hour. I’d done some serious thinking. I wasn’t going to “wing” the interview but write stuff down and have the sheet in front of me.

Why did I want to do the degree course? I was prepared. I really do want to improve as a writer. There is only so far you can go alone. Only so far friends and family can carry you. I wanted experts to tell me what I was doing right and where I was going wrong. I wanted to be pulled out of the rut I wrote in. I wanted to try new things, be adventurous, make mistakes, be corrected and all that kind of stuff.

There were things I didn’t say. I think that buried under it all – all that noble stuff – there is perhaps a need to prove myself, although buried even deeper is an assurance that I have nothing to prove. At school I was slotted into a middle stream. It was assumed that I didn’t have the ability to do the hard exams. “O” levels were mostly off limits and “A” levels were seen as too hard a climb. My classmates agreed with that assessment. I love the phrase “poverty of aspiration” but hate it in practice. No one was expected to shine. Part of wanting to do the creative writing degree course is about almost wanting to shout at my English teachers. "I could have done it, the “O” level and the “A” level if you had let me."

When I first voiced the notion of teaching as a career – I wasn’t the most vocal of pupils. I seemed to quiet. I would be better off doing hairdressing or something that did not involve interacting with groups of people. There was a stubborn need to prove them wrong. I taught for thirty-seven years. Admittedly, I’d often thought I was in the wrong place – but I wasn’t. That need to prove myself pushed me into a persistence that I think is quite rare these days.

Maybe as a writer, particularly going down a self-publishing route, I still feel the need to prove myself.

We talked about books. A writer is only as good as the books he or she reads. I’d like to say that I rad Wuthering Heights every year. I’d like to boast that I have read all the classics. But I haven’t. I’d like to say that I’m not as hooked on fantasy novels as I am. I mentioned a current book I’m reading, a non-fiction book, “The Science of Storytelling”. It’s about the way the brain is wired for stories. It is fascinating. As ever, I’m reading it far too quickly and not letting things soak in.

We talked through the practical things – Mondays and Tuesdays spent at the university and video conferencing. There would be three units of work to do over the year seeing as I was opting for the part time course. There were forms to be filled in, if Ii was accepted.

It feels like I am in touching distance of a dream becoming reality. Maybe it is only now, into the autumn of my life, that I have self-belief that I can do this. Not trying seemed easier than trying and failing. I have enough writing history behind me to be assured that I won’t fail.

I am standing on this cliff edge of adventure.