Poets and Bards - the Sequel

There are no doubt some rousing speeches out there. Churchill…

And who can forget Mel Gibson in Braveheart?

“Run and you'll live -- at least a while. And dying in your beds many years from now, would you be willing to trade all the days from this day to that for one chance, just one chance to come back here and tell our enemies that they may take our lives, but they'll never take our freedom!!!”

If we go back in the Bible to the story of Gideon, his speech has a different ring to it.

“Anyone who trembles with fear may turn back and leave Mount Gilead.” Judges 7:3.  Two thirds of his force walk away.

Still stirred by the visit to Armadale Castle and the museum, I’m still caught up with the role of the poets and bards back then in the MacDonald clan – their task this time of rousing the warriors, stirring them up for battle.

Let’s get back to our imagined great clan meeting hall with the huge fire blasting our heat, wood spitting and smoke curling around the rafters. Let’s imagine this time that our visitor, the stranger, has listened to the poet praising his chief and chosen to stick with his first impression -that weak man, unable to muster a strong army. He’s done with counting the fighting men in the hall and decides to make his challenge.

What if two thirds of the fighting men think they are outnumbered and have little chance of victory? 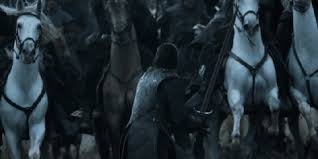 The battlefield
And war you dread
The blows that rain
Upon your head
The sword, the shield
Not lifted high
You flinch with
Every battle cry

Your king strides forth
Across your world
His victory banner
Bold, unfurled
With angel armies
At His side
He fights and wins
And claims His bride

The king who heals
Who mends, restores
Leads us on to
Heaven’s shores
Conquerors all we
Plunder hell
What glorious tales
We have to tell
Posted by meljkerr at 7:58 am