It was a focussed week of writing, this last week spent in Skye with a friend. The house is TV free,   adio free and the only way to get sufficient bars on the mobile phone to call anyone is to stand in the garden. It makes for an atmosphere where there is little to distract.

The house is a few yards up the road from the Armadale ferry port where is a small coffee cabin, a rather expensive wool and clothes shop, a path up to a woodland campsite and two quality souvenir shops. There a beach on one side of the house and and on the other side a bay that fills up with the incoming tide.

I had left the Fitbit at home. I did not want to be pulled in by its insistence that I walk the daily 10,000 steps. It’s not that there is nowhere to walk but I was there to write.

On Wednesday my friend headed off to Portree on the school bus. I’m still new to retirement and did not wish to play bus monitor to how ever many pupils they picked up on the journey. A 7.15 start to the day didn’t appeal either. I decided instead to walk over to Armadale Castle and the Clan MacDonald centre.

The Fitbit might have celebrated at the idea of the 10,000 steps, but the place was a lot closer that I supposed. The bracing half hour walk turned out to be a mere ten or fifteen minutes. The entry price was steeper than I wished to pay but it was nothing to my friend to spend a half day there and still not have seen all she wanted so I thought it would be value for money.

I am not my friend. 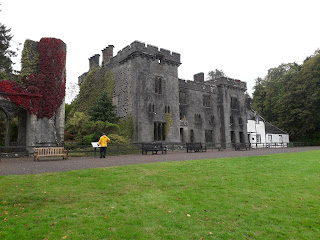 The castle itself is a ruin and off limits to visitors because of falling masonry. It was raining and not a day for exploring the gardens and forest trails. That left the museum and the café. The cafe was not up to scratch – the coffee was fine but the scone was not a fresh one. The museum was crowded, likely because of the rain and the dry scones. The commentary came in mobile devices. All at once I missed Joe. There was no sneaky finger pressing buttons and changing the language setting to Urdu.

I didn’t go so far round. I stopped to listen to the commentary for point 5. It explained the role of poets and bards. The poet in me went no further. I kept pressing the yellow extra-information button and listening to what seemed to be my purpose in life. Poets were necessary to the clan. They wrote praise poetry about the clan chief and they stirred the men to fight before the battle.

Imagine if you will the great clan meeting hall, the huge fire blasting our heat, wood spitting and smoke curling around the rafters. Imagine long tables piled with food. The chief sits on a raised stage. Imagine a visitor, a stranger. It is the clan code to welcome strangers, so he is invited to join the feast, after surrendering his sword.

Imagine that the visitor thinks he knows what kind of man the chief is. Perhaps he thinks him a weak man, not an adversary that can muster a strong army against him. He’s looking around, perhaps counting the fighting men. He’s nodding to himself and notching up a victory in the near future.

Don’t look at Him and
Think Him meek and mild
Don’t glance at the cross and
See blood, bones - and defeat
Don’t swallow whole what is said
By those who don’t know Him or
His kingdom or
His Power

His words are potent
His touch has power

Open your eyes
Feast on His unseen wonders
Wake up your ears
Dance to His whispers and
Answer the cries of the wayside-fallers
Let Him pour out the sweet honey of
His word on your tongue
Lend your voice to His melodies
Then He will wrap around you, like a cloak
The fragrance of life
Though some will insist they smell death
Open your embrace to lepers