It was closer to six rather than fifty. Last night saw the first meeting of the art class I joined in Alness. I am finding the Vincent Van Gough in me.

“Count me in,” I said when a friend of mine told me he was going to be running a series of art sessions for adults in the Alness area. I confess to an absence of talent and imagined my "O" level art teacher turning in his grave with the idea of letting me loose with a paintbrush.

We were introduced to tints, tones and shades. As a writer I would have used the terms interchangeably.

“In the field of design, every colour has what are called tints and shades. A tint of a basic colour is a lighter version of that colour, and a shade is a darker version. Tone is a general term to describe the lightness or darkness of a basic colour”

Armed with a couple of brushes, a jam pot of water, a piece of heavy paper, a palette and a dab white paint and dab of black, we set about painting boxes and cubes. The lady sitting on my right had the experience of children and painting and had no trouble. I skipped the tints and went straight for the shades overestimating the amount of black paint to mix with the white. The man on my left also headed into the shades.

The man on my left was a friend I had told about the class. He has once upon a time, over four months or so, produced a wonderful picture of a tree. He intended to keep painting but it was something that fell by the wayside. I wouldn’t say it was his painting skills that prompted me to tell him. The drive over to Alness isn’t a long one but as the days shorten and the nights become dark, I’m less happy driving. The bus routes could have got me over to Alness but not home again. I’m happy to share the petrol costs.

I googled Piet Mondrian when I got home. He painted a very nice tree using shades of grey – he night have been the one who coined the phrase long before the book came out.We looked at his tree in an art book.

There was an instant connection. Piet Mondrian was born on 7th March 1872 in Amersfoort, the Netherlands. He’s Dutch and I’m a quarter Dutch. Maybe it’s my right hand and the fingers on it that are specifically Dutch – painting Dutch. He became a primary school teacher and he painted in his spare time. Another connection – we are both teachers. We are both artists – his preferred media is paint while mine is words. His early paintings were mainly landscapes, featuring fields, rivers and windmills. No connections there. I visited a windmill when I was in Amsterdam years ago – and a cheese factory. And that’s where all the things Piet and I have in common. I’ve not moved to Paris and I know nothing about cubism. It’s the Dutch Connection that matters. 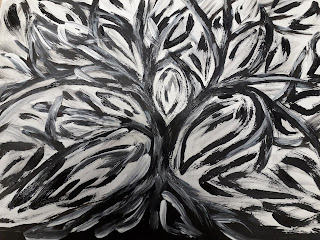 We began our own version of his tree. The secret is in the layers. One could be talking about lasagne. A black tree with branches and stuff overlapping was followed by filling in the spaces with white paint being very careful to merge a little with the black branches. Lots of grey – fifty shades perhaps. Then fine white lines on the black branches. The next bit I think I misheard. Did he say olives? The bits between the branches we filled with olive shapes – or almonds, maybe. My tree was looking less like Piet’s. It took on its own life and personality. I was amazed at how much movement I had created.

It’s amazing how we had all been given the same materials, the same dabs of paint, the same glimpse of Piet’s tree and the same instructions and yet we had produced very unique trees of our own.

What might have been interesting, if we had tramped on to a psychology class, was to try and work out what the tree revealed about states of mind or personality. I got caught up in the swirl of the brush creating the olives or almonds in the spaces between the branches. I liked the shapes. I liked the act of creating something and capturing a sense of movement.

God has created us in His image – His creative image. I might strive to find connections with Piet Mondrian but my connection with God is very clear. I am beginning to look like Him and act like him more and more every day.
Posted by meljkerr at 8:55 am