The Battle of Culloden - Part 2

Culloden Moor is my go-to place when there’s a clear night sky and I’ve a hankering to see the stars. It wasn’t dark when I went this afternoon and it wasn’t stars I was looking for.

I had been in Inverness perhaps a week or two when the subject of Culloden came up. I was on a gospel outreach team and we were knocking on doors and sharing the good news of the Kingdom. I had introduced myself and was about to launch into the well-rehearsed four point plan of salvation when the man, it was a man, held up a hand and said he didn’t talk to the English because of the outcome of the Battle of Culloden.  My knowledge of any history is sketchy at best but it doesn’t stretch to Scottish history. I thought the battle was recent and that he might, perhaps, have been a survivor! I was all set to apologise for any harm that had been caused.

A more recent visit to Culloden was on the way back from a long drive out to Grantown-on Spey. I’d been enlisted by the Crofting Commission to drive my husband to a meeting there. We had a cup of tea in the town before he went off to his meeting and I went shopping. It’s not a big place. His meeting took longer than my shopping expedition. I found a forest walk to amble along. On the journey home a toilet stop was required. We were just that too far away from home. We stopped off at the visitor centre – me to the bathroom, Joe to the shop. He bought me an ice-cream. It was a warmer day then.

Over the last few months I really have felt a little strung out. I wouldn’t say that I am losing battles but I am fighting more than my fare share. I felt the need to declare a few victories. I decided to look up a few Bible verses and march about, as some do, and proclaim battles won long before I fought them. 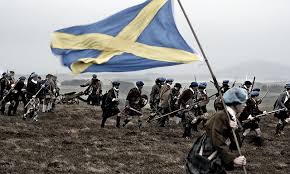 “Culloden Battlefield,” said God, “That’s where you need to go.”

“Culloden is all about defeat,” I replied. “I’m looking for victory, not defeat!”

“The place of defeat is the best place to start declaring victory,” said God.

It was six o’clock in the morning and it made sense.

“Take a friend with you,” He added. We both knew which friend He had in mind.

I looked up some verses and a victory prayer, printed them off and put them in a poly pocket. The forecast was for rain and I dug out a woolly hat. Umbrellas are not much use when there is a gale force wind ripping about the moor.

I drove around to the friend. The friend didn’t want to be taken and I didn’t twist her arm.  She knew that she wasn’t winning many battles but trailing around a battlefield on a wet and windy afternoon didn’t appeal. She wasn’t convinced that the exercise would achieve anything or that God was her side right now. We talked for a while but the bait I dangled didn’t attract.

It was very windy but not wet. Armed with my Bible verses I headed off along the path.

Deuteronomy 20:1-4 was a good reminder that being outnumbered by the enemy was no cause for fear. God had looked after me so far along my journey and wasn’t about to walk away.

I began to sing as I marched along – “In the name of Jesus, in the name of Jesus, we have the victory…” I had the moor to myself. No one else was daft enough to be out there in the wind. Apart from one lady and her dog. Phone held to ear she was shouting that she was freezing. Yes, shouting – she hadn’t worked out that she wasn’t talking to a person next to her with the wind whipping away the words as she spoke.

Psalm 44:3-7 was another reminder that my victories were not about me and the strength I wielded. God’s right hand, His arm and the light of His presence were the reason for any success. If it was all down to me it would be a sorry thing Indeed.

Exodus 15:1 prompted another song. A golden oldie. “I will sing unto the Lord, for He has triumphed gloriously, the horse and rider fell into the sea.” Moses faced the Red Sea in front of him and the Egyptian army coming from behind. If I had taken my walking stick with me, I would have held it out in front of me and pictured the Red Sea parting. God always comes through in the end. There’s always a miracle just about to happen when we call on His name. We just don’t call.

As I kept up the Bible readings and the songs something in the heavenlies shifted. The battlefield scenery, the wind howling and my speaking God’s word was a powerful combination. I have a vivid imagination and I’m never sure that what I am sensing is just the imagination running amok, or if it’s something spiritual is going on. There was a sense of something hostile almost, saying this battlefield was their domain, but at the same time something not hostile almost glad to see a friendly face.

I read 2 Chronicles 20:15 and thought about all the battles I insisted on fighting when I should have stepped back to let God fight on my behalf. How long do we wait for God to step in? How do we know if it’s our turn to fight and not His? I thought about the soldiers at the battle back then – they probably didn’t have much choice in whether they fought or not. The movies tell us it’s better to go down fighting that live under a cruel king.

A line in “St Patrick’s Breastplate” (I Arise Today) about calling upon all the resources we have been given to stand “against every cruel, merciless power that may oppose my body and soul”. I sat on a bench sheltered from the wind and read the lines and thought about the powers – natural and supernatural – and called on God to “shield me today”

There was another battle on Culloden Moor this afternoon! There were armies out there – unseen armies.  I marched at the head of an army of angels. We snatched back the ground the enemy had taken – in my life and in my friend’s. It was an awesome battle. The victory songs are being sung in heaven right now!
Posted by meljkerr at 5:58 pm