Going for a walk is always on the to-do list but doesn’t often get done. Mostly it’s on account of the weather. I know I’m not made of sugar and I won’t melt but I don’t like getting wet or being cold. Just lately access to a toilet needs to be factored in. Today was an almost-spring day and I swear the sun called to me to come out and play. The sun and Seamus Heaney that is.

I read his poem, “Postscript”, this morning. In the poem he had driven out west and the wind and the light played off each other. The sea was on one side of him, wild and wave tossed. On the other side of him was a slate-grey lake and a flock of swans. It was one of those moments of rare beauty.  Nature lines up a spectacle and most people miss it. They are, writes Heaney -

“…neither here nor there,
A hurry through which known and strange things pass”

I suppose I didn’t want to be “a hurry” through which things pass. I wanted to be there when those moments happened and to not let them pass. Heaney had climbed into my head, I climbed into my car and off we drove to a forest trail that I like. 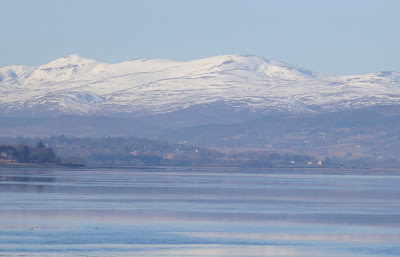 It might have been a sunny day but it wasn’t warm. The tide was out as I drove along the road that skirted the Beauly Firth. The firth stretched out in a dozen shades of the pale blues and the distant mountains were snow-capped. It was breath-taking in its beauty.

It was a Seamus Heaney Postscript moment.

I tried to stir the poet in me to write something. The Seamus Heaney in my head kept poking me to describe what I was seeing and scorned my choice of words. Later, not then, I wrote something -

I have worn glasses since I was three years old. I have worked my way through a number of NHS plastic frames of every colour of the rainbow. I once asked the optician if there was anything I could do to improve my eyesight. I’d read somewhere that there were exercises a person could do to improve the eye muscles. There were inspiring case studies of people tossing their glasses away because they no longer needed them. My eyesight problem did not fall into that case study category, said my optician. If I was looking for an exercise to do I should relax my eyes by looking at a distant object. It wouldn’t improve my eyesight but it might slow down the deterioration that would come with age. Looking at a distant object seemed more like putting strain on my short sighted vision but I did it for a while.

I relaxed my eyes by looking at the snow-capped mountains far off in the distance. Nothing was moving. Seamus Heaney might have had his wind tossed sea and a flock of swans with ruffled feathers. I had a light blue sea and stillness.

The stillness crept into me, through my skin and into my soul. The “hurry” in me slowed down and the known and the strange things stopped and tipped their hats and we engaged in conversation.