There was a lot of hype yesterday about the moon. It was a super blue blood moon.  I understood only the super part of it as being bigger than usual because it was at its closest to the planet. I’m not sure where the blue bit and the blood bit come in.

Last night as I picked up my husband from work and turned to drive down the hill back into town, the moon was there, all big and orange and swathed in threads of cloud.

“The moon! The moon!” I said, excited. I tried to explain how it was different from other moons. I told him that I would drop him off at home, grab the camera and indulge in some moon chasing. By the time we got home, however, the clouds were no longer threads across the sky but hulking great masses of grey and spitting rain. The moon was hidden and the rain was getting heavier. 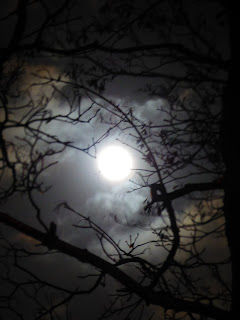 I grabbed the camera, took a quick toilet stop, and headed along the path around the housing estate. I wasn’t sure I could get a big enough stretch of sky with no houses or street lights and decided to take the picture of the moon through the trees. They were still in the bare winter state, black naked skeletons again a bright moon. I had the camera lens on zoom and the pictures – just two of them - looked atmospheric and spooky.

I was reminded of a poem I had written last month prompted by another poem “The Moons” by Grevel Lindop.  I love these two lines from the poem.

How many times did you call me from the house,
or from my desk to the window, just to see?

On first reading I thought it was the moon calling the poet from the house or from the desk. Looking at the moon seems almost a waste of time. I have moments when I feel nature is calling me to go outside, to switch off the TV or leave the laptop behind. In this poem it’s another person. He responds by writing a poem, seeing as he can’t string a necklace of moon glimpses. He was called away from his desk, his place of work, to glimpse at the moon. It’s almost as if the work at the desk has become all-consuming, urgent and necessary.

Last night as I zoom-lensed in on the moon, I thought about my poem “Wasting Time” and the first verse in particular.

come and waste time with me, my love
stand beside me and see the moon
leave those pressing things behind for
tomorrow’s moon is not this one

How much we miss when we don’t allow ourselves to be called away from what seems important to do something that seems trivial.

How much we miss too when we don’t surround ourselves with people who will call us away from the desk.

I really thought about the phrase “waste time with me”. We live in a world where wasting time is frowned upon. “Efficient” is becoming a horrible word for me. I like the extravagance behind the idea of wasting something.

Yesterday’s moon isn’t today’s moon. Some of these wasting time experiences are just one off opportunities. They don’t turn up day after day. If we miss them – we miss them. There are some things that ought to be unmissable!

Jesus promised He had come to give life in all of its fullness:=

I have a friend in God who drags me away from the desk to waste time with Him chasing the moon. I might not think to chase anything if God did not stir up the adventures in me.