“O Lord, what great works you do! And how deep are your thoughts.” Psalm 92:5

I often get accused of using words that no one understands. There may be a simpler way to express an opinion, using the words my listeners are familiar with, but there is such a rich vocabulary out there that I refuse.  The dictionary every year drops out words to allow new ones in. Sometimes the words that hang on in there lose their original meanings and become something else. Language evolves and I understand that. I just like words and lots of them.

This morning as I was reading Psalm 92. I had a notebook and pen, a couple of commentaries and devotionals and I make notes. As I came to this verse the words “Dulsie Bridge” came to mind. Some things don’t get dropped out of the memory. I wrote this in a Faithwriter’s Weekly Challenge. 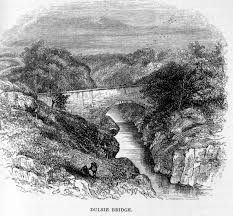 One Saturday, Joe and I went for a drive. We began at Nairn with a late breakfast and then as the weather wasn’t particularly nice for walking, we went for a car drive. We picked up a tourist information leaflet at the local office. It contained directions for a car drive in the area. By following the instructions we would see things that we would never just bump into.

Several miles along the route was the sign post for the Dulsie Bridge. There was no picture in the leaflet, so we were not sure what we were looking for. We have seen some nice bridges in our time.

The “bridge” was beside the road. It was very humped back with a turf top to it. There was no water going under it, the river having been diverted by engineers at a later date perhaps. We took the required amount of photos - me on the bridge, Joe on the bridge, me standing next to the bridge and so on. It was a nice bridge!

Imagine our surprise when a mile down the road we came upon the real Dulsie Bridge! It was even labelled! The road dropped down towards the bridge that spanned a huge chasm, and then climbed up steeply on the other side. It was a real feat of engineering. The two bridges were incomparable - the other must have been an old drover's bridge!

We looked at each other and laughed thinking of the photos we had taken!

If we had not continued with the drive after seeing the old drover's bridge, we would have never realised that we had missed the real Dulsie Bridge. Seeing the real thing, we knew that the first bridge wasn't it.

When we know what the real thing looks like, we realise that what we thought was "it" really wasn't at "it" all. The real thing is much more impressive.

This morning I wasn’t thinking about what the Christian life is like or not but what God is like. I have a feeling that what we label as God’s great works don’t really come close to what they are about. Rather than allow scripture to define them, we define them according to our own experience. Perhaps because we live less vibrant lives than we ought, our concept of those great works fall short of what they really are. We limit our perceptions. God is not allowed to demonstrate His great works because they make us feel uncomfortable.

The depth of God’s thoughts? I’m not sure that we are willing to dive that deeply. We imagine, all too often, that God thinks like we think. Scripture tells us otherwise – but we don’t live scripture very well. We soften and dilute to make life easier and forget to be radical. We seem to have lost the ability to turn the world upside down by taking God at His word.

I felt a little bereft this morning.  A little bewildered. I find myself, perhaps, in a comfortable place and wonder what happened to the risk.

I was talking to a group of young people this week about the changes that we had been through over the last twelve months. Some were taller. Some were more confident. Some had new family members or had moved house.

I shared how I had lost courage. I noticed it particularly in driving places. Last year Joe and I went to Yorkshire for a second time. The first time the hills, the unfamiliar roads, getting in and out of cities, driving in the dark – none of these things alarmed me. Last year – it was a different story. I wasn’t as courageous then as I had been. I admit I have dodgy eye-sight and a need to update my glasses – so, yes, I had reason to be wary. Deep down I lamented my lack of courage.

It is not my surroundings that should make me comfortable but the knowledge that I am secure in God. Whatever the adventure, whatever the risk – I am safe in His hand.
Posted by meljkerr at 10:29 am