More Tales by the Fireside

We have a rule in this house that runs along this line – if you’re too sick to go to work, you are too sick to go to anything else that might be happening that day. I broke that rule yesterday. It was not an accidental breaking or a realising after the event kind of thing. It was deliberate. If I was not as old as I am I might be grounded. Actually, I have grounded myself anyway. Had I felt yesterday as poorly as I feel today I’m not sure I’d have been up to any rule breaking at all.

The second session of the “Tales by the Fireside” storytelling workshop was yesterday evening. I will miss the third session and maybe the grand finale of actually telling any story around a campfire in Dunain Forest.

Last week we played with kennings. This week we explored the art of storytelling itself and drew storyboards.

It would appear that in many parts of the world the art of storytelling is becoming extinct. Today when people meet together around a story it’s all played out on a cinema screen. It’s just you and the action sequences and no connection with the hundred or more other people in the same room.  A story may be told but they have done all the work and you are an observer of it rather than a participator in it. Disney provides all the bottled-milk happy endings we need and really doesn’t encourage us to chew real food.

Even bed time stories are read rather than told.

A story was compared to boat, with the storytellers being the crew and the listeners being the passengers. Perhaps it was an apt comparison seeing as we were on the Loch Ness Barge and the session was hosted by the Scottish Waterways Trust.

To be a storyteller, rather than a story reader, there are certain elements that must be included in the narrative:-

Knowing that we were going to be looking at stories I printed off a children’s story I had written a while ago – “The Laughter Thief”. I’d revised an earlier version of it to make it child friendly. I’d written the story but yesterday was the first time I had read it out loud to anyone. It was nice to give it a life it had never had before! 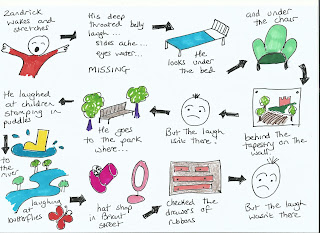 Not only was the story read out, but I got the chance to “tell it” too. We were encouraged to draw out a storyboard - picking out the bare bones of the story in pictures and phrases. With this in front of us, with these clues about what happens next, we were given the opportunity to tell our story. 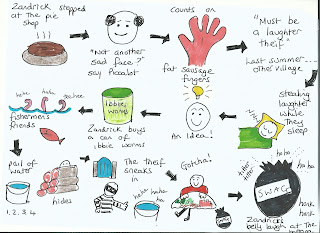 There were a couple of other people for the workshop. One of them told a story about a stonecutter who was unhappy with his life and envied others. Magic transforms him into all the things he thinks he would rather be until he comes full circle and realises his own stonecutting life is the best.

The other man told a story about birds in a competition to find out which of them could fly the highest. After reading the story and creating his storyboard he was able to tell the story.  A first telling did not allow for enough of the crafting that comes with really knowing the story well but it was a start. We discussed what could be added.

I was working with my own story that I knew well enough. It wasn’t about learning it off by heart but using the clues on my storyboard to move from one scene to the next. I tried to act it out as I went along. It was a lot of fun. It is also a confidence thing too. From reading to telling allowed me to be more creative as I went along. It also allowed the listeners to pick out what they saw as what was important in the story.

Of course, being related to the best storyteller that ever lived, my big brother Jesus, helps. Time will tell whether I have inherited from Him the trick of telling a good tale.