I booked myself on an urban sketching walk for this morning. The local museum was celebrating the Festival of Architecture. They had secured the services of couple of artists to “encourage participants to take a fresh look at the architecture of Inverness and to encourage creativity and skills in a supportive environment”.  Inverness apparently has hidden gems that need to be discovered and sketched. Sketchbooks and a variety of pens, pencils and pastels were provided for those who didn’t bring their own.

There was a map of the intended route – a 35 minute walk round some of the back streets looking at “Ross & Macbeth buildings”. There was a lack of context about the buildings or the architecture. A brief history lesson, a short power-point presentation telling us what features to look out for perhaps, might have come in useful.

The day was not as dry as we would have liked. No fat raindrops fell heavily, splattering on the pavement, but it was damp. It was light drizzle. I had an umbrella, in the car, at the top of a long flight of steps where the carpark was. If I had known we were heading up those stairs I wouldn’t have popped around the corner to the shop to buy a cheap umbrella, which wasn’t as cheap as I would have liked, or became embroiled in a sharp tongued encounter with the assistant who gave me the wrong change.

I didn’t know anyone on the walk. They were keen. They were more experienced than I was. And I was kind of glad that I had left my hearing aids at home so I didn’t have to talk to anyone.

We stopped at the bottom of the Raining Stairs and it had been raining. Little exercises of ten, five and two minutes had us scribbling away. One of the artists looked at something I had drawn and said, “Brilliant”. My husband looking at that same picture over tea and cakes later said, “Is it a Dalek?” It was the two minute picture of a slab of concrete next to the stairs decorated with some round stones.

At the top of the stairs the view was something different. Buildings and walls had been demolished to leave a view of the castle, albeit behind a metal grid fence festooned with “Keep Out” signs. A couple of blocks of flats are being built. 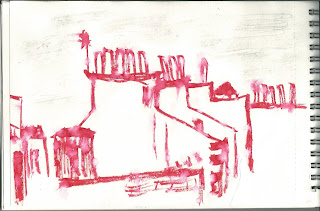 Another opportunity to sketch something. I chose the end of a row of terraced houses with an interesting array of chimney pots. I had picked up a red brush-tipped pen and began my lines. What I saw with the eye, and what I drew with the pen didn’t quite match up. If it had a water colour feel to it – that was the rain which was falling in earnest. I scribbled with my pencil and smudged the lines to create some grey clouds!

We walked around to the college at Midmills. It has been closed and most of the buildings have been demolished. It used to be the Inverness Royal Academy once upon a time. The listed part of the building which is still standing, all boarded up, is being turned into a creative hub of artists’ studios. The rest of the grounds will be given over to more blocks of flats.

I think this was where I gave up trying to sketch anything recognisable. The pencil wouldn’t do what I wanted it to do. I had started too high on the paper and couldn’t fit the tower in. Everything was hidden behind fences and trees and high grass and drawing a picture of a bike next to a lamppost looked more inviting. I felt we were getting in the way of pedestrians using the pavement. The umbrella wasn’t helping any.

I was doing the heavy sighing thing when a fellow sketcher drew near.

“As if anyone can draw under these conditions,” she muttered. She went on to tell me that sketching was something you needed to keep doing daily. The eye and the hand improved their coordination in time. She flicked through her book to demonstrate. Even those early sketches were good but I could see improvements as she moved from one page to another. Drawing daily was the secret – practice makes perfect. I thought about the two years I had done “O” level art in school many years ago and how I really hadn’t improved as the weeks went by. Maybe I just didn’t have the artist’s eye.

“Just give me words,” I said, “and I will write you a poem. A pencil and a sketch pad are not my media.”

“You write poetry?” she asked.

We strolled down the hill, the others pulling ahead as we talked about poetry. She had had a couple of poetry books she had self-published. She had a friend who had written short poems with very simple sketches. I told her about my books. The morning had brightened considerably for both of us and it had nothing to do with the weather. We had, apparently, made each other’s day.

The final stop of the morning was the Victorian Market and another series of sketches. My husband recognised the ceiling arches and admired the picture I drew of an umbrella. I tried to draw the shop front of the jewellers where we bought my engagement ring. My husband insists I was chanting “rubies and diamonds” and rubbing my hands together as we entered. I dispute this claim.

What did I learn today? Nothing about architecture. Nothing about Ross and MacBeath. Nothing much about the technical know-how of sketching. I learnt that I’m not that observant. That I really can’t draw. That it’s refreshing to do something other than the usual Saturday things. I learnt how easy it is to find and make new friends when you put yourself out there.

Thank you, Margie, for being there this morning.
Posted by meljkerr at 4:13 pm