I have a Pinterest page. After the initial enthusiasm of finding and pinning pictures, it’s not something that I visit that often. One of the few boards I have is labelled “Heroes and Heroines”. I wonder that someone hasn’t told me off about my gender specific political in-corrected-ness.  It’s not a big board. They have to meet stringent requirements to get on it. Andy Murray is there for being a great tennis player and winning Wimbledon.  Brian Cox is there for being a scientific gentleman who doesn’t deride people who believe in God. He is also easy on the eye. Scully from X-Files is also there. I know she is not a real person but I like the courage that she displays going into dark places ahead of Mulder. 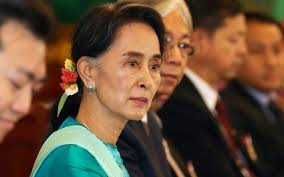 Aung San Suu Kyi is also there – and I haven’t yet unpinned her, but I’m coming close to it.

Aung San Suu Kyi spent years under house arrest in Myanmar. She had been campaigning for democracy, the right to vote and to have the result of elections respected by the then military-led government. Justice and freedom from fear were key issues. Her Buddhist faith was the source of her strength. She ticked all the boxes and took her place among my heroes and heroines.

Some would say that the person she was under house arrest, the person then that had no power, is different from the person she is now.  There were elections in 2015 and her party won 71% of the vote. The military government didn’t surrender all of its power, but much of it. Aung San Suu Kyi, prevented from taking a seat in the new government, took a back seat. Htin Kyaw might be the official leader but everyone knows it’s Aung San Suu Kyi who wields the power.  Justice and freedom have not been as evident as expected.  Some are calling for Suu Kyi to return her Nobel peace prize while others, Desmond Tutu for example, are asking her to live up to her prize-winning status.

No great political change happen easily and perhaps it is too soon to start pointing fingers. Ethnic conflicts have simmered and exploded for decades. The Rohingya Muslims have never had an easy time but now they seem to be crossing the borders into other countries, homes burning behind them. Some would lay the blame firmly on an army crackdown. Others would point to the Muslims themselves as wrecking villages and burning homes.  Still others would insist it’s all fake news. Through it all Aung San Suu Kyi has remained mostly silent and rarely given interviews. In the absence of “nothing” people are inclined to invent their own “something”.

Psalm 82 talks about men in power, or the “gods”, and what they called to do.  Leaders whether they recognise it or not are given power by God to act in his stead.

I was thinking about her apparent   I remember Tim stirring himself to win that third set and the fourth too to level the match. He was on the way to victory but he didn’t win in the end. The last set wasn’t even a contest. The effort it took to level the match had taken all of his reserves. He didn’t have enough left for the last set. Apologies to Tim if I have got it wrong.
reluctance to act. Back in the tennis world before Andy Murray there was Tim Henman. There was a match. It could have been a semi-final. It could have been Goran Ivanišević on the other side of the net. Tim was two sets down and it might have been match point.

Perhaps the same is true of Aung San Suu Kyi. All of the resources she possessed were used up long before she became the behind-the-throne leader of Myanmar. Levelling the match, getting the military government to agree to free elections – that might have been all she should have done. What happened next might have been someone else’s burden. Tim Henman stepped back to let Andy Murray pick up the racquet and ball. Letting go and graciously moving aside is never easy to do. Not to trust people to do what you consider to be the right thing is also never easy to do – the whole delegating thing.

Such a weight of expectation is put upon one set of shoulders. We expect our heroes to do it all for us and sometimes we don’t become the heroes that we ourselves are capable of being.

Coming to the end of our resources happens to us all. But should it? In a sense, as Christians we should not be using our own resources in the first place. God’s resources are endless. We never come to the end of them.

I don’t want to think I have come to end of the resources God has for me.

I don’t want to be a one-man show but a part of a team.

I don’t want to hold on to the baton when I should be passing it on to the person coming up behind me.

I don’t want to be rubbed off someone else’s Pinterest board of hero and heroines because I did something unheroic that wiped out everything good thing I had accomplished.

I want to become all that I am capable of being – In Christ – no more and no less.
Posted by meljkerr at 4:43 pm