I am Usain Bolt

I didn’t watch the race. It was Usain Bolt’s last race and a final opportunity to gain another gold medal to add to the collection he already had. The script didn’t go as planned and Justin Gatlin won the race.

I know little about the world of athletics. It has been hampered, as many sports are, by performance enhancing drugs and Justin Gatlin doesn’t have clean hands, or clean arteries, where drugs were concerned. My husband wasn’t happy that Gatlin won. He chuntered on for a while about athletics being reduced not to good runners, diet, exercise, hard graft and the will to win but down to which drug company does the better job. In a world where coming in second is not celebrated the pressure to resort to something other than talent and hard-work must be a temptation.

The husband chuntering continued for quite a while. He didn’t have a good word to say on Gatlin and he wasn’t alone in that. That Usain Bolt was beaten was not the issue.  Being beaten by Gatlin was a big issue. I’m not sure why life time bans have to be overhauled, or how eight year bans can get reduced to four years. Do the goal posts of banned substances shift and change so much that athletes get caught out? Does the cough mixture they used to deal with a tickly throat contain the wrong combination of chemicals? I can’t believe that it’s all accidental.

“Let’s be Usain Bolt in this,” I said to the unhappy husband by my side. 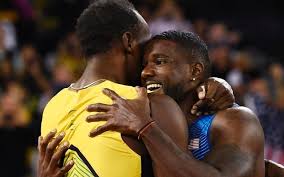 Usain Bolt was the real winner not of the 100 metres, but of something of greater value.  Beaten into third place he found the time to give Gatlin a hug and congratulate him on the win – and not through gritted teeth or with a mental image of running the man down with a big lorry.

"He [Gatlin] is a great competitor. You have to be at your best against him. I really appreciate competing against him and he is a good person."

The general reaction of the athletics world was something other than Usain Bolt.

"Why should we celebrate Gatlin's win? No-one wants to see someone in their mid-thirties who has had two drugs bans win the 100m. We don't know what lasting effects the drugs he has had in his system have had. It makes a mockery of the sport for me," said one three-time bronze medal winner.

“You can't sweep things under the carpet. The people who run the sport have to sort things out because we are not supposed to have moments like this,” said another Olympian.

I know where they are coming from. I have a real problem with Christians letting the side down. I think because of their faith they should above things like adultery or abuse – but then I’m not above the smaller abuses. This morning God and I were talking about my lack of self-control.  I’d been playing around on Facebook and done one of the quizzes.  Morgan Freeman was about to tell me the truth. Apparently I don’t have to lie down and surrender when faced with a chocolate bar, I don’t have to cram it into my mouth and claim I coudn’t help myself. Self-control, God reminded me, is a fruit of the Holy Spirit – I am without excuse!

There is a generosity that seems to be absent from the world these days. I remember reading this verse many years ago from Psalm 20.

“May we shout for joy over your victory and lift up our banners in the name of our God.” Psalm 20:5

It shouldn’t matter that I was not in a good place at the time. It seemed that just about everyone I knew was succeeding in life, flourishing and blessed. I was crawling through my days, barely hanging on by the fingernails. To celebrate their victories when I was living through failure seemed a big ask. It was a big ask to demonstrate generosity when I was living in poverty. I think I chose to shout for joy convinced someday I would have my own victories. My life and times then. as now, were firmly entrusted into God’s hand.

Sometimes it's not just the victories of other people that we don't celebrate - it's our own victories too that we fail to shout joy over. We stain them with "Yes but, I could have done better".

Was it a big ask for Usain Bolt to hug and congratulate Justin Gatlin? Bolt didn’t think so.  If anything Justin Gatlin showed courage in facing s hostile crowd. That could not have been easy. To know that this time it is just you and your hard training, without the artificial stimulants, that also takes courage. To I know that you are running against everyone’s hero and will perhaps end his dream that takes courage. To reclaim what you once tossed away – that takes courage. Maybe that’s what Bolt saw and congratulated.