An Abuser? Not me!

Confession time. There is abuse happening in my house. It’s not an everyday occurrence but became sufficiently bad at the weekend that we called in an expert to deal with it.

I am not the victim. I am the abuser. My husband isn’t the victim either before you start matching up any bruises you might see to any comments he made about walking into a door.

Sunday afternoon the washing machine stopped working. We won’t go into why I was breaking rules about the Sabbath. I understand entirely the fact that I have a whole week in which to do the washing and I shouldn’t be doing it on the Sabbath. It’s just that I like a full load and sometimes that doesn’t happen until the Sabbath.

The door wasn’t closing or locking. There was no satisfying click. No button pushing. No gurgle of water. No gentle turning of the drum. Nothing.

It wasn’t an old washing machine. The sticker on the machine assured us that we could expect 10 years’ worth of washing. We hadn’t had it 10 years although time seems to flash by sometimes. On a previous machine we had replaced the door at least twice so the problem wasn’t new to us. Apparently, so I read somewhere, doors on front loading washing machines were always needing to be replaced.

I once stayed with my brother in Spain. I wasn’t actually staying with him as he was in hospital and I was staying in his flat whilst visiting him. He also had a broken door on his washing machine. A screwdriver rested on top of the machine. There was a knack to manipulating the screwdriver to close the door.

The expert, an earnest young man with a very large tool bag, and no replacement door, diagnosed the real problem – abuse! 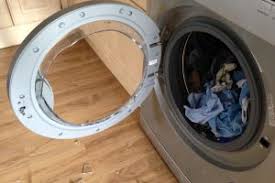 “You’re slamming the door” he accused. He swung his arm in a short arc, acting out the offending action. “The inner mechanism of the lock is made up of plastic. The plastic bits can take only so much abuse before they break.”

Dis he actually use the word abuse? I think so.

He repaired the door in five minutes but the lecture lasted considerably longer. I could see he was a man who cared about appliances. His touch was gentle and his voice, addressed to the machine, not me, was soothing.  He was less so when he turned to me once the task was done. He gave me a tutorial on how to open and close the washing machine door, watching me with eagle eyes, and hovering nervously in case I got it wrong. Satisfied that I knew how to so it properly he added a sticker to the washing machine door. It wasn’t a five step reminder of how open and close the door properly but his name and number if I should resort to my abuser habits and break the little plastic bits again.

Later, I told my husband about the young man, the fact that the washing machine was working and passed on what I had learned about washing machine doors and the right treatment of them.

“Abuse, huh?” he said. He has bushy eyes brows, my husband. They danced a little before settling down.

There was clearly an implication being made. It would seem that the washing machine wasn’t the only object of my abuse. That’s possibly true. I promised myself when we bought a new cooker a couple of years that I would never let it get to the baked-on spilled messes of the previous one. TLC – tender loving care could be applied to any number of gadgets about the house – actually the house in general.

But what about people? Am I a people abuser? Do I slam the door on them and break what’s fragile in them? I worked for a while as a waitress in a local hotel. The day I left the manager said that it had been a pleasure to see a gentler, more patient side in me develop.  What? Was I that bad?

I confess that many of the conversations God and I have are about my people skills. They are not absent by any means. I’m not always gentle. The actual interaction I have is mostly gentle, but there’s a not so gentle mental commentary going on. One of these days the mental commentary is going to cease to be merely mental I fear. Something will slip out. How I think about something or someone will affect what I do or say.

Is it really that hard to be kind?

We have an expert at hand who doesn’t just tell us to be kind bit, through the life of Jesus in the gospels, shows us how.
Posted by meljkerr at 7:38 am