Lessons from the Street League

It was Friday evening. It was a little bit damp and drizzly. And it was not warm – perhaps not cold enough for a hat, scarf and gloves and thick fleece – but cold enough to stamp ones feet and turn ones back against the wind. It was the final football match of the season.

Months back there had been a request, a plea perhaps, from a young person that I go out and support their team in the Inverness street league. They play football on the pitches at the back of the house. My car had been spotted in the community carpark so he knew I lived nearby but not specifically which house. I agreed to go. They were the boys in the blue and white stripes. I actually knew many of the boys on both teams. They didn’t win that game and, sadly, no one expected them to. Another young friend, pulling up beside me on his bike, informed me that they were the worst team in the league and there were better teams I could support – his own team, for instance. But the
first boy to ask got my support.

The days they played, Mondays and Thursdays, were not the best days for me. I could usually only commit myself to a first half before heading off on the Monday to a creative writing group and on the Thursday the church prayer meeting,

I usually stood on the wrong side of the field, the opposition side, not because the other side was too far a walk to commit myself to, but because at that time in the evening the sun was quite low in the sky and shining on me, hindering my view. I shrugged my shoulders apologetically when my team scored a goal and I cheered and the parents, girl groupies and other parties interested in the fortunes off the opposition frowned at me. 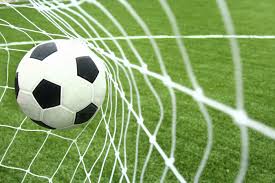 There are a couple of outstanding moments in my supporter first-halves. One of my lads, with a free kick from way back, kicked a magnificent shot that spun high and over the defence, over the stretching goalie and landed in the net. It was a shot worthy of any professional player in the premier league. I told him so later when I saw him next and he smiled. Another shot, there was another boy, a corner kick this time, perhaps just intending to make a good cross. The ball soared and curved and slipped into the net in a really tight angle. I was the nearest supporter. He was delighted and our palms met in a high five!

Becoming the pro-supporter that I was I came to know the offside rule well. I used the jargon like an expert and was able to converse intelligently about the highlights of a game. I shouted the usual “blind ref” comments from the opposition side of the field and nobly applauded the opposition goals if they were good ones.

We were becoming difficult to beat and working our way up the league. I had tried, unsuccessfully, to find a web site that had the current results and league positions. One of my boys told me they were third. This was a week or two ago.

“But you are usually at the bottom!” I blurted.

“I know. Last year we were really bad.” He replied.

“What has changed? What has made the difference this season?” It would have been nice to hear that my support was making the difference, but it wasn’t a realistic explanation of their improved performance.

“We are taking it seriously,” he said, “We train hard and we don’t mess around anymore.”

The last match of the season we didn’t win. The opposition were better and my boys were outclassed. Our goalie was superb. There might have been seven goals that got by him but the tally could have been much higher than that. Yellow cards were being thrown at my boys like confetti. The opposition had got themselves a penalty (for what I considered to be a very mild and harmless challenge). Another goal to add to their tally they thought, but our goalie was magnificent and punched the ball away.

I can think of a whole host of things where “taking it seriously, “training hard” and not “messing around anymore” could make the difference between lingering at the bottom of somewhere or climbing to near the top.

Churches and Christians take note!
Posted by meljkerr at 11:00 am