I am back to my default position of catch-up with my daily Bible readings.  I am being taken through some of the chapters in 1 Samuel that lay the foundation for God rejecting Saul and choosing David as the next king. 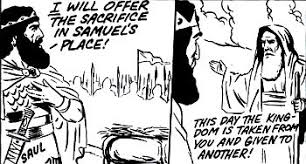 I got to the bit where Saul and Jonathan took the initiative and attacked the Philistines.  The philistines didn’t take kindly to being attacked and responded.  Saul’s 3,000 men began to run away and hide.  Saul stayed his ground and waited for Samuel to come and make an offering.  A week later Samuel hadn’t arrived and Saul took it upon himself to make the offering.  He was not authorised or equipped to take on the role of a priest, but figured that some action was better than no action.  The wrong action isn’t better at all. Saul had seriously overstepped the mark and God was about to remove the kingdom from him and give it to another.

Life under the Philistines wasn’t harmonious to begin with, but things got progressively worse.  The nation had raiding parties to deal with and on top of all that the Philistines took away all the blacksmiths to prevent Israel from making weapons.  It wasn’t weapons that they needed but sharp farming implements.  They were required to go cap in hand to the Philistines to have their equipment sharpened – and pay for the service too.

We have all probably heard a dozen sermons preached on the character flaws of King Saul.  Saul began the chapter with 3,000 men and ended it with just 600.  His disobedience had consequences for him and for the nation.

That’s not what caught my imagination later that night.  I’d crawled into bed and read a few pages of a book before the eyelids began to droop.  I switched the light off and then it happened…

It was as if Saul spoke.  I was gripped by a conviction that I couldn’t shake.  It pulled me out of bed and on to my knees.

I do diatribes – spectacular diatribes.  A diatribe is a forceful and bitter verbal attack on someone or something.   I recognise a diatribe when I hear it and that night a diatribe echoed in my thoughts.  It went something along these lines…

“How dare you pick fault and criticise my actions?  At least I acted!  No one denies that I did the wrong thing…but I did something.  I admit I had no authority to do what I did but something needed to be done about the enemy.  Who is the worst offender?  Is it the one who stands against the enemy and oversteps the mark…or the one who has the authority and does nothing with it? If I had the authority you have been given to set the enemy to flight I would have used it.  But what do you do?  You have been given authority from God.  You can tell a mountain to move from here to there and it will be done.  You can open doors that no one can close.  You can set captives free.  You can cast out demons.  You can bind things and lose things.  You can bring about the Kingdom of God, His will on earth as it is in heaven.  You have been given the authority to do that by God.  But what do you do?  Nothing!  The enemy is rampaging and you do nothing! If only I had the authority you possess.  Why don’t you act?”

Saul’s motives might not have had much to do with protecting his people.  It might have been more about looking and acting big in front of people.  But I cannot escape the conviction that I have a God given authority to bring about “His will on earth as it is in heaven”.  I have access to the throne room of God – something Saul never had.

I have the authority and now is the time to wield it!
Posted by meljkerr at 8:49 pm