It is just typical, isn’t it? We spent the last couple of weeks in work melting with the heat pouring through windows, and as soon as my holidays kick in the clouds gather, the rain falls, thunder and lightning storm across the sky. OK I realize that I am living in Scotland and one cannot guarantee good weather, but it just seems a little unfair.

The same batch of washing went back on the line this morning, after having been hauled in twice before. The cloudless blue sky, according to the weather forecast, wasn’t going to last.

I completed a few essential tasks and then decided to pack a picnic lunch and head for the hills while it was still dry. Just above Loch Ness there are a number of smaller lochs away from all the Nessie hunters and tourists.

There was a sign just before the road dwindled into a single track which informed me that work was being done up ahead. I assumed it was resurfacing or something, but overhanging branches were being cut down, left by the side of the road, to be picked up later. Single track roads are not very wide to start with, so trying to manoeuvre around piles of debris was a challenge. Passing the lorry that was cutting down the branches was even more challenging.

I parked in a long lay-by beside Loch Dunchelchaig and headed off down the path that followed the shoreline and plunged deeper into the surrounding woods. I had the camera fully charged and ready. I always hope to catch a glimpse of something interesting but lack the skill to capture the moment on film.

Imagine my surprise to encounter the smallest of fawns tottering around on the path just ahead of me. It wasn’t big enough, or wise enough to disappear into the forest, and just looked at me. Eventually it stumbled over to the edge of the path and into a nest of heather. 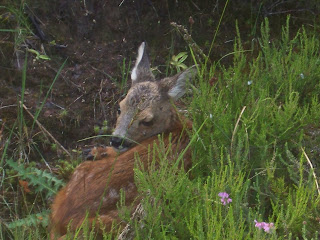 I half expected mummy deer to appear out of somewhere, and do the mothering thing of scaring me in some way or another, but the baby seemed to be on its own. I wondered if mummy deer had got shot, or had an accident. Perhaps the fawn was orphaned. The one thing I needed, but didn’t have in my rucksack was a feeding bottle filled with deer milk, and I thought for a while about dismantling my chicken sandwich and sharing it. I wondered whether I ought to call someone, a rescue home for lost deer.

I so wanted to pick up the fawn and take it somewhere safe.

Common sense prevailed. Just because I couldn’t see mummy deer, didn’t mean that she wasn’t around somewhere. Picking it up, feeding it my chicken sandwich, was probably the worst course of action I could have taken. What might work for a human baby (feeding it a chicken sandwich?) doesn’t work for every other species on the planet.

How little I know about the workings of nature! How much I am divorced from it all, living in my terraced house, driving about in my red car, buying my food cellophane wrapped from the supermarket!

And how little I know about the Creator of all this nature! Am I equally divorced from him too?
Posted by meljkerr at 6:01 pm