As Others See Us 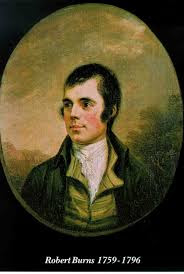 I have to admit that the gallery in Inverness Museum is fast becoming one of my favourite places. The gallery is on the first floor of the building. It is not a permanent exhibition but changes every so often. For one of the exhibitions, quite a while ago, a number of artists were told to do something about chairs. The variety and creativity of the results was amazing. A more recent exhibition focussed on the topic of journeys. Some artists had sculpted boats, others had used shells and seaweed and packing cases.

The current exhibition celebrates the poetry of Robert Burns. A selection of Scottish people from all walks of life and different disciplines had been asked to choose their favourite Burn’s poems and explain what it meant to them.

I don’t pretend to know much about Burns. Joe and I have never attended a Burns Night supper, although we have done our own versions on a much smaller and less formal scale with friends at home.

The exhibit caught my eye because one of the first contributors, complete with photograph and brief biography, was Peter Howson, whose artwork I admire. His choice of Burns verse was not one that I was familiar with.

Yet I am here, a chosen sample,
To shew Thy grace is great and ample:
I'm here, a pillar o' Thy temple
Strong as a rock,
A guide, a ruler and example
To a' Thy flock.

What impressed Howson about Burns was that such a flawed man, touched by tragedy, could write such beautiful poetry. We are all flawed in some way, but too often our flaws and our tragedies poison what we do. We don’t always some out with something beautiful.

One of the other contributors made the comment that Burns’ poetry was accessible. There is no point writing anything is the reader needs a degree or has to have read the classics to understand what you wish to communicate.

Before I found the room with the Burns poetry, there was another exhibition of various artists. On one wall was a series of still life paintings – a bowl of fruit, another bowl of fruit with a ball on the table, another bowl of fruit reflected in a mirror, another bowl of fruit in shades of grey. The next wall had a series of black and white photos, many of them looked like close ups of a pile of driftwood. The following wall – that could only be appreciated by a person with an art degree – contained canvasses with, how can I put this? When I was a child I played with wet paint and a straw, blowing the paint in different directions. Had I kept any of my masterpieces, they would have stood side by side with any of those canvasses! “Heron on Water” had lots of blue paint, but where the heron was anyone’s guess! Not accessible at all! The final wall was a collection of sculptures. Again they had some exotic names but didn’t look like anything recognisable. There is nothing worse that staring at something and just not making the connection.

Another of the Burns’ contributors was a musician Eddi Reader. She has snag her way through every Burns’ song going and recorded an album. In her comments she said how she had been to all the places that Burns had been, stood in the same doorways, drank in the same bars, looked out on the same scenery he had seen. It reminded me of all those people that go on pilgrimages to the Holy Land, and walk in the footsteps of Jesus! They feel closer in some way.

There were a couple of other comments that have made me think about my writing. Someone mentioned that Burns looked all about hi, at the society of his day, at all the issues that people were talking about. He responded with poetry. Poetry was his heart speaking about all that he saw around him. The idea of making poetry my response to the things around me is challenging.

I am aware that my poetry is very much limited to spiritual things, although in some sense all things are spiritual. “A poet should cast his mind widely”.

For me poetry seems to be born out of meditation on scripture. There are few poems that I don’t muse about long before I start to string words together. Maybe if I mused more about all aspects of life, I would have a wider repertoire of poems. The more poems you write the more you perfect your craft.

Much to ponder!
Posted by meljkerr at 7:06 pm