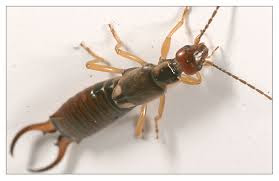 The teacher training college that I went to was a place called Middleton St George, about seven miles or so from Darlington. It was perched at the end of the runway at Teeside Airport. Teeside wasn’t the busiest of airports, which was all well and good seeing as the noise from the planes landing or taking off was rather loud. It you happened to be outside when it happened you could almost identify individual faces in the round windows, the plane being so low!

The college, in a previous existence, had been an air force base during the Second World War, and maybe the first one too. It was very military looking. The buildings were built not to look good but to be practical.

The place was closed down just after we left. In fact, we were the last intake. Our final year saw just the couple of hundred of us bouncing around in the buildings.

One thing that they did have was an earwig infestation. The earwigs lived in the ventilation system. The vents were at the top of the walls and the rooms being a certain shape, the beds would only fit alongside the wall where the vents were.

It was not uncommon to be lying on the bed and have an earwig fall on you. It was more common for you to be out of you room for most of the day and when you returned there would be half a dozen crawling around on your eiderdown (this was the days before duvet covers).

I don’t really do creepy crawlies. I don’t do them crawling around on the bed, and I certainly don’t so them falling on me! After a while, I guess we just got used to them. We stopped screaming and jumping around like banshees when one landed on us. We just picked it up and tossed it out the window. It was just part of the college experience!

I am not even sure if the college every got in the pest control people. It was never deemed a serious risk to our health and well being, but had someone offered to get rid of the earwigs, I don’t think anyone would have protested. There would have been a resounding “Yes, please!” They may have been harmless, but they were not loved and respected!

It just makes me wonder why Pharaoh, when confronted by the plague of frogs put up with them one more day than he needed to. Once he had agreed to let the Israelites leave, Moses offered to pray for the frogs to go. All Pharaoh was required to so was to say when he wanted Moses to pray.

Imagine frogs in the bed, frogs in the bath, frogs swimming in your tea, and in your bowl of cornflakes. There were frogs everywhere…and not just the ones that Moses had summoned. There was a double dose because the magicians had conjured up their own frogs too.

Pharaoh’s answer to “when” was “Tomorrow.”

I have no answers.

“Tomorrow”. How many times have we said “Tomorrow” about certain things? There are things that we put up with when we don’t really need to. We can do something about them now. Why wait any longer?
Posted by meljkerr at 9:35 pm