Back on the Road 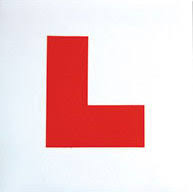 There are some people that can tell you exactly what they were doing when Neil Armstrong took those first memorable steps on the moon, or when the shots rang out from the grassy knoll that felled J. F. Kennedy, or when someone opened fire on John Lennon. These are defining moments in some people’s lives. I was probably outside “playing”.

Where were you between the hours of half past two and half past four yesterday afternoon? One would hope that you steered well clear of the roads in Inverness! Joe asked for and was given a block of driving lessons for his birthday. It has taken me a few months to get around to phoning an instructor.

“Has he driven before?” I was asked.

Two cars before the one we now have, Joe drove some of the way down to Rugby. Joining the A1 at Newcastle during rush hour was a notable event! Driving over the Aberdeen regularly for fertility treatment, Joe tackled some of the roundabouts in Elgin quite fearlessly! He has, in his time, accidentally driven into a privet hedge – the difference between forward and reverse gears can be a stickler at times. During a hill start he panicked, rolled down hill for a considerable distance and ended up in a ditch! Yes, he has driven before!

The lesson yesterday was a two hour diagnostic operation to find out how much Joe had retained from his lessons and “practice” some fifteen years ago. You see, Joe doesn’t really want to learn to drive. He has a perfectly good chauffeur who is willing to drop him off and pick him up. It’s just that the nature of his job is changing and it is no longer of case of not wanting to learn to drive but having to learn to drive. The job demands it – and Joe loves his job.

He phoned after the two hour lesson to tell me that it went well. He liked the instructor and thought that the instructor liked him. I think what Joe liked more was that he was getting to grips with actually passing his test this time around!

Me? I am looking forward to passing on the mantel of the MOT and all car related concerns!
Posted by meljkerr at 5:13 pm