Imagine if you will a police line up. Imagine that there is an assortment of men standing side by side. They don’t look alike. There is nothing particularly similar about them. They are not even wearing the same kind of clothes.

Imagine if you had heard about a man who, for example, works with your husband, or wife. You have never met them before, but only hear about them in conversations.

Imagine that from the police line up you are asked, on the basis of all those conversations, to pick out the man. Obviously you don’t know for sure, and your best guess is not going to see him convicted of a crime or anything. You are simply guessing.

Actually this reminds me of a game show hosted by Donny Osmond not so long ago. I can’t remember the name of it, but the aim of the game was to match up the people to their occupations. I rather thought I would like to be a contestant, not on the basis of being able to pick the right people and match them to their jobs, but on the basis that I would get to stand very close to Donny Osmond!

My husband, a very long time ago, used to mention a friend of his who didn’t exactly work with him, but was involved with the Crofter’s Commission. I formed a picture in my mind of what I thought this person looked like. I thought he was in his early fifties, not particularly tall, quite stout, bald headed and serious looking. I have no idea how I came up with that kind of a picture.

Imagine my surprise when I actually got to meet the man. My husband will tell you that my jaw hit the ground with a solid thud. This man was Mr Universe personified. He was, as I blurted out to Joe afterwards, “Gorgeous!” He might have been in his early fifties but he didn’t look it. He was tall, slim, had brown hair that just long enough to flop over his forehead in a very attractive manner. And he smiled a huge smile. He hugged me, because I was Joe’s wife and I went weak at the knees.

My reaction came as no surprise to my husband as all the women in his section at work were drooling at the mere mention of his friend’s name! He just thought I was made of more solid stuff!

Having shared with some friends, Christian friends, that I have read and enjoyed “The Shack”, I have found myself involved in a dispute. They think the book is poking holes in the Christian faith. One of the main characters in the book is Papa, or God, but is not described in a familiar, masculine way. It took a while for me to stop being offended that his description of God did not match up to my impressions, or stereotypes. That was exactly the point that the author was making though that we see God in a certain way and anything that doesn’t match up we tend to ignore. 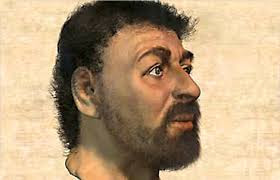 A while ago, the BBC produced a series of programmes called “Son of God”. They traced the main events of Jesus’ life. Part of the attraction of the programme was using all the up to date information to construct a model of what Jesus looked like. It was like the unveiling of some great mystery. What the Bible doesn’t tell us, the BBC using the latest technology was about to reveal.

I can remember being very disappointed with the final product. It didn’t look anything like “my Jesus”. My Jesus had definite Robert Powell overtones – blue eyes and long hair. This didn’t look like that! I remember thinking logically that the BBC’s Jesus was closer in terms of ethnic colouring and stuff.

I can understand fully why the second commandment is there – about not making graven images. We need to relate to Jesus in some way. It is when we refuse to change our picture that we begin to become unstuck.

When I meet Jesus I do wonder if I will recognise him. I am almost sure he will not look like Robert Powell. It will not be from the colour of his eyes, or his hir that I will know him. Perhaps it will be the welcome that is expressed though them.
Posted by meljkerr at 10:42 pm

Can't comment on The Shack as I haven't read it yet (though I've heard much of the controversy, I reserve the right to read the book for myself first.)

But I totally agree with what you're saying, and I want to encourage you to keep on going down this avenue. Dare to get into a place of daily revelation by the Spirit, by asking the kind of questions that religious people daren't ask, or think they have so neatly sewn up in their theology.

I've been invited to preach a bit farther afield on a number of occasions this year and each time I've felt led to ask the people assembled the same question that Jesus asked his first followers: who do YOU say that Jesus is?

He was only interested in who they thought he was in that moment. That's all that seemed to matter. The personal knowledge in the moment rather than subscription to a doctrine. Daily encounter-revelation was to be the foundation for the building of the church, a movement of people who set others free. It was to be the foundation for kingdom authority and living under a true open heaven - releasing into the earth what is already in heaven.

The term "Christian" can mean so many things in our modern world. What it means to me is not a philosophy, an idea, or even a religion, but a personal choice to use every opportunity to follow Jesus. That means getting to know him and relinquishing control to him, in every circumstance of every single day. I'm still learning to do this, but the more I do so, the better life gets.

The problem we can have with church meetings if we're not careful, and we can have the same problem with Biblical study, is that we have the control, and in so doing we form Jesus in our image and the image formed by those around us.
Obviously there's nothing wrong with these activities, provided we don't fall into the trap.But I want to KNOW Jesus. And I want to know HOW to know Jesus.

Peter got his revelation direct from the Father by the Spirit. Not through "flesh and blood" - not by reading the tea leaves in his circumstances, studying literature, even studying scripture, or taking what others told him at face value.

It was the richness and diversity of everyday experiences hanging out with Jesus that brought revelation to Peter - and Jesus recognised that as the Father's revelation, by the Spirit.

I find that I can only do that in a very limited way in churchy environments and in private study, where the revelation is controlled by the environment created. I only truly get to know him when I let him lead me where he wants to be in life, when I relinquish the control to let him do that, and when I have the guts to say "Jesus, I only know you a little, I'd like to know you MUCH better".

For example, it's only when you're faced with someone who is suffering AND you don't have the answer to hand AND you press into Jesus rather than the circumstances, that you get to KNOW the Jesus who already suffered for them so that they can be set free. Anything less is theoretical theology regarding suffering, and it doesn't set anybody free.

Another example. Most church people I meet wouldn't offer to pray for somebody to be healed unless they had healing all sewn up in their theology beforehand and had a track record of success in healing. They don't seem to realise that on that basis NONE of us qualify. Friends I have who are prepared to minister healing to others have simply decided to follow Jesus The Healer into the unknown, and in so doing get to know Jesus The Healer better. I believe that defines faith, whereas what most Christians seem to want is a worldly mindset of "first in the classroom, then in the marketplace". It just doesn't work that way. Why? Because we're talking about a relationship. Not a method or a philosophy.

If we don't engage in Jesus' mission in the world around us then we don't get to know The Real Jesus, the title of your post. We just get a head stuffed full of theoretical theology that can only be shared with others who subscribe to the same theories. Sadly, that describes a lot of the western church. But Jesus is saying: "Who do you say that I am in this moment? Will you follow me in this moment and really get to know me, or will you just keep cramming your head with theories about me and sitting still?"

My plea to every church person I meet is this : let's just start really following Jesus together.

Sorry to have used your blog to preach. But I'm so passionate about the simplicity of this, and your post is "pushing all the right buttons". My advice to you? Just go for it! Spend less time worrying about the opinions of others, and more time following Jesus.

The challenge to "Hang out with Jesus" is something I wrote in capital letters in my notebook!

It is only by being with him that I will get to know himm.