I think I ended a previous post with the wish that I could give some answers to give some people breakthrough in darkness they were walking through. I just might have some “magic words”.

They are not my words. They are not words lifted from the Bible either. They come in the form of a book I bought last week “The Shack” 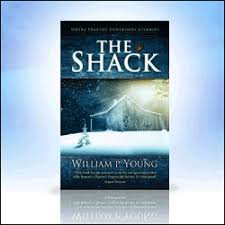 The blurb on the back sets the scene. A man has experienced the loss of his youngest daughter. Evidence points to her having been brutally murdered. He is left with a Great Sadness that seems to cover him like a heavy blanket over his shoulders. Four years on he gets a message from God to meet him at the shack where the murder occurred.

He chooses to take up the encounter not really sure whether it is a cruel joke or what. Does he really encounter God there or does he just fall asleep and dream it all?

“Where is God in a world so filled with unspeakable pain?” That’s the big question that the book attempts to answer. Mack gets to ask the questions we would all like to ask if we were face to face with God. He gets to say the things we want to say, but we are sometimes too polite to say them, or too scared. He gets to shout at God. He gets to experience God’s tenderness, His tears, His smiles, His sadness and to hear God’s side of the argument.

The book digs holes in my preconceptions and makes me look again at what I think about God, about the world, about me and my part in it, about suffering, about answers and about how little I really know about anything.

There were things, truths explained, I already knew, but hadn't really allowed to filter down into my heart, and then through to my feet to be walked through daily. Being an RE teacher, the philosophy of religion comes as part of the degree. The book showed that it's not supposed to be mind-boggling, and largely irrelevant theory but life giving, Spirit breathing truth.

I did what I always do when I have got a good book to read. I spent the next few hours reading it. The washing up didn’t get done, or the ironing and I didn’t talk to anyone until I finished. This is not the way to read “The Shack”. One should read it slowly soaking in the words, taking the time to digest the words and think about them. There is a lot to chew on.

So I will read it through again - slowly.
Posted by meljkerr at 3:55 pm

The Shack has been sitting, gathering dust, on my reading pile all summer. Sounds like I need to dust it off :-)