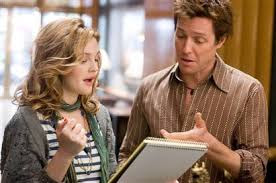 Last night as part of our Valentine celebrations, Joe and I went to the cinema to see “Music and Lyrics”. It was labeled as a romantic comedy and I thoroughly enjoyed it. For an hour or so after wards Joe and I were humming the song the two main characters had composed. It was very romantic and very sing-able and if they bring out a record, I will buy it! Hugh Grant has a very nice voice, although in an interview he put it all down to the sound equipment. Just as computer packages can airbrush models so they look slimmer, or have perfect skin tone, you can do the same with voices! I prefer to think that Hugh is just being his usual self-effacing self.

I enjoyed the movie because it struck a chord with me. You have probably never heard of a couple of song writers before – Kay Carver and Melanie Morrison. This goes way, way back in time.

Kay Grant was one of my best friends at school. She was visually impaired and used to wear plastic glasses with very thick lenses. I think that she was virtually blind in one eye, and not so far off blind in the other eye. She was very tall and gangly and not at all graceful. She was good at sports – she always won the cross country races. She was kind of person that just kept running.

The love of her life was music. She played the piano and taught herself to play the guitar. She really was a genius on the piano – after one lesson she composed a tune.

She discovered Jesus a short while after I did and she began writing songs. She would come up with a melody and then wait for a while for the lyrics to come together. It is a long time ago so I don’t remember any of the songs, but they were her heart to Jesus.

The Christians that I hung around with then were guitar players and singers, so I have always had a soft spot for music, although I don’t play. I had guitar lessons, kay tried to teach me, but I never got beyond the pain. I didn’t like sore finger tips!

I can remember one time Kay playing a melody and saying she didn’t have any words yet. I asked if I could write the lyrics. I am not even sure if I asked. My interest in writing was just in the bulb beneath the ground stage, no shoots as yet, but I thought I could string a few words together, and she was too nice to tell me to back off and let her do it. The words that I came up with, yet again it is too long ago to remember them, they were nice words. They were beautiful words and the song sounded great – but they were not “heart” words. They were “head” words, strung together because they fitted well, but they lacked soul. Looking back I cringe at my audacity. I am sure that if Kay had been allowed to do her waiting thing, the lyrics she would have settled on would have been so much better.

As it was, years later, she got married to a man called David Carver (hence Kay Carver). When we met up we tried to remember the song lyrics, but because there was no heart and soul to it, the words had been forgotten. She could still remember every word of the songs she had written!

Where does Melanie Morrison fit into all of this? I had been away living in Cyprus for five years, returned home to live with my parents for a while and started attending their church. I was single at the time, and there was a wonderful man who I thought I was in love with and thought I might marry – Michael Morrison. It never happened but Kay Carver and Melanie Morrison had such a good ring about it! I imagined the two of us, Kay and myself, getting back together to revive our songwriting partnership. It didn’t happen.

I watched the film and I remembered those days. I am so different now. Today my lyrics would have heart and soul, but I wouldn’t but in and invade someone else’s melody the way I did then.
Posted by meljkerr at 10:00 pm