Last week the Inverness Botanical Gardens resumed their garden walkabout. An expert, someone that knows plants, leads interested people around the gardens answering all kinds of garden questions and points out what they are doing or not doing at the moment. 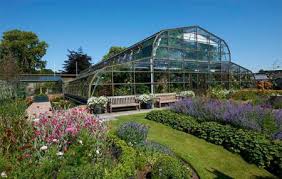 It wasn’t warm. It wasn’t bitterly cold. Some parts of the path were still iced over and I’m not sure how the fish in the outside ponds, if there were any, were doing beneath the ice crust. Most of the flower beds were empty and ready for planting once the soil warmed up. We took a soil thermometer with us. It a Star Trek tricorder lookalike with a bit of flex and a probe to stick into the soil.  The plant pots were slightly warmer than open ground. Apparently you can plant broad beans in cold soil and the seeds will grow. There’s no point planting cucumbers though.

If only, I thought, there was something similar for measuring the temperature of someone’s spiritual passion. I pictured myself snatching the device – not the soil temperature one, but the spiritual temperature one and thrusting the probe part into my heart. Would I be anything other than cold? Would the state of my heart and spirit be too cold to plant anything that would grow? How does one measure the heat of the spirit in a person? Is it how they pray? The words they use? Is it in regular church attendance? How much money is given in tithes and offerings? I’m not sure it is any of those things. It is about how close a person walks with Jesus, how much they listen to His voice and how they respond. It’s more than just getting the externals right.

There were snowdrops – little gifts of spring.

We really didn’t do much walking outside. There was nothing to see. There would be cut flowers in one bit, fruit bushes and trees in another bit – it was all a future thing.  One of the ladies in the group was a cut flower volunteer. In the summer, she picks the flowers, makes them into pretty bunches that sell in the shop, twenty bunches a day.

We went into the tropical greenhouse. My glasses steamed up and sweat broke out on my brow. We went upstairs, out of the way of the downstairs workers who were overhauling all the potted plants. Some plants were being re-potted, some were being pruned, some were being de-loused and some were being carted off to sick bay. A plant that isn’t really flourishing attracts destructive insects that move on to healthy plants. There were some plants that were too ill and fit only for the compost heap. Every worker knew the names of the plants, knew what a healthy plant looked like and knew what to look for in terms of bugs.

Something shifted in my heart.  Just for a moment I wasn’t in a tropical greenhouse. Just for a moment I was in a church looking at the work of church leaders. I thought of every member – name known, their walk with Jesus known, their spiritual health known, their strengths and weaknesses known – everything that was needed to help a person flourish – known. A church like that, a Christian in that environment – how could that not be a powerful thing? It should never be down to one man, one minister, one pastor, one vicar being the one man in charge. It has always been a team of elders that was required.

I am not sure that I am really known like those plants in the tropical greenhouse were known. It’s not perhaps the role of a church leader to wrinkle stuff out of people like the diner with the plate of snail shells and a fork. Maybe it is about the kind of environment that a church creates that encourages people to be open. I am frequently being prodded by the Spirit to share something. Through sharing I am encouraging people (I hope) and also giving people a glimpse into the heart of me. I am perhaps more known than I realise.

We ended the hour in the potting shed – a place I had never been before. There were a lot of table nudged together, a lot of chairs to sit on and a kettle and all the things needed to make a cup of tea. The woman in charge was trying to whip up the volunteer-gene in us. So many things about the botanical gardens don’t need expert knowledge to do. She showed us a white board – A virgin oblong of white space. She planned, she said, to list jobs on it, jobs that anyone could do. The lady who made up the bunches of flowers spent many summer mornings in the potting shed.

To serve, to help behind the scenes, to release the experts to do the jobs they couldn’t do – yet another picture of a vibrant church. When did we all become so obsessed about being centre stage or being hauled out to take a bow and enjoy the applause? Serving hearts serve.

One hour and so many things to learn – and not all of them about gardens.