The theme of the writing workshop was “Rebel” and was a part of the Scottish Book Trust’s plans to get people writing.

“Rebellion incites opposition and change, allows us to find our own individual voices and inspires future generations to challenge convention and expectation.”

I wondered what I could actually write about in terms of rebellion – I am not a rebel. I am a rule follower. If there were no rules I would have to make some up just to feel comfortable.

There were a little more than a half dozen participants, a large scroll of paper on the floor and marker pens. The venue was a church building that had been converted to a second hand bookshop. Spiral staircases, galleries and stained glass windows housed shelf after shelf of books.

I’d been to Berlin last week and seen the memorial at Bebelplatz, the public square in the centre of Berlin, the site of the notorious Nazi book burning in 1933. A glass flagstone looks down on empty bookcases.

It was a jolt o be sitting in a chair surrounded by bookcases full of books. I had never given it much thought before. The things we take for granted.

I don’t quite know where most of the folks had been but they were all into the Jacobite rebellion and the Battle of Culloden. That’s not where I was.

The first exercise after a warm up stimulus was to evoke a place. A place you’ve actually been to, and which you associate with a rebellion of any sort. Now I have been around Culloden Battlefield a number of times. There are marker and flags and the names of various clans. The Kerrs are there – fighting on the “wrong” side.

My own train of thought was a personal one. 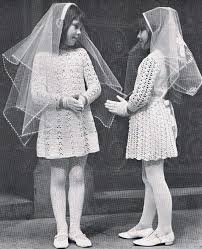 I have a bad memory about some events. I think I remember then as memories only because I have been told the stories so often that I have made them mine. I’ve seen a photograph and woven my account of what happened in the picture.  There’s a photo in an album of three girls in white dresses dancing on the front lawn outside a house. I am one of the girls and it was taken the morning of our First Communion. I remember the dresses were the same, sewn from the same pattern. I’m not sure I had ever worn something that wasn’t a hand-me-down, so the dress was my dress, made for me, worn by me. It must have been a warm day. No rain. No hand knitted cardigans. I suppose if I put my mind to it I could work out how old I was. Not a teenager.

While the three girls were dancing on the lawn, showing off their white dresses, there was a boy standing off to one side. He was not dancing.

Dressed in neat trousers and a white shirt, perhaps even a tie, he was scowling. Brows dark and lowered, a stubborn jut of a chin. Fists bunched, fingers pressed into his palms.

I think Mike looked at me with almost disapproval. I possibly didn’t believe in God either, not the way I do now, but I was caught up in the white dress, looking pretty for once and the whole ritual of it. I wanted to be centre stage with everyone’s eye on me, because I never usually was.

Why did it matter so much? Don’t we all go through the motions at times? It’s just what we do because it’s expected.

I rather think it wasn’t just about believing in God or not. My dad had died and my mum wasn’t able to look after us well for a while. The Roman Catholic Church stepped in to give support. It almost seemed that it came with a price – the children of the household going through all the rituals of confession and communion. It seemed as if they took control. There were rules in place that hadn’t been there before.

Michael’s rebellion was his way of trying to claim back his independence. I kind of admired him then, but chose not to join in the rebellion because I wanted to wear the dress.

There was an opportunity towards the end of the afternoon of the writing class to write a rebel poem:-

feeling powerless
we always dance the
rehearsed steps
“It’s my life” we say
but it isn’t, is it?
So
we dig feet deep into soil
raise heads
lift chins
And say, “No!”
And make them listen
Posted by meljkerr at 10:00 pm