“If we are thrown into the blazing furnace, the God we serve is able to deliver us from it, and he will deliver us[c] from Your Majesty’s hand.  But even if he does not, we want you to know, your Majesty, that we will not serve your gods or worship the image of gold you have set up.” (Daniel 3:18-19}

The words were spoken by Shadrach, Meshach and Abednego to Nebuchadnezzar when they refused to serve his gods or worship the image of gold he had set up. I have always loved the “but-if-not” phrase, giving God the freedom to save them or not. Rescued or not, pulled alive and not even smelling of smoke or being burnt to a crisp didn’t matter. They were not about to waver.

The other day I was watching a clip posted on Facebook of a father’s response to his daughter’s tantrum. I don’t know what it was that she wasn’t getting. She was sat outside the supermarket carpark, on the bonnet of a car, wailing. The father was sat next to her, eyes rolling in his head. He didn’t shout at her, or smack her or tell her she was a bad girl. He just talked, not to her, but to the camera in his phone. He said that if he gave in it wouldn’t do either of them any good in the long run. He wouldn’t be being a responsible parent. She wouldn’t be learning essential lessons for the years ahead. He talked about his own upbringing which wasn’t good. He got shouted at and smacked. He didn’t want to do that to his daughter. He wasn’t going to enter into negotiations or bargain with her. He was quite happy to explain why this or that was better. If she chose the option that wasn’t better she needed to know the consequences, which were not open for discussion. He told her all of this, after insisting that she stopped crying and listened. He went on to say they would go back into the shop if she wanted to, but if she started crying again, they would just come back out. Was she ready to go back in now? She nodded.

The preacher this morning was talked about just getting on with being Christians and to stop with the tantrums. If we didn’t like a word preached we were not to gather our stuff and storm out of the door. If we didn’t like the music, or the particular worship leader on today, or the spelling mistakes in the screen, or the tea or the lack of any heartfelt welcome – that was not permission granted to leave. We were not immature toddlers in the faith and tantrums were just not allowed. We need not to pick at the word and snip here and there to get a comfortable fit. We were the ones that had to fit ourselves to the word. We were the changing ones – not the word. I liked that!

He talked about Job and all the troubles Job had to deal with because God had boasted about him to the enemy. The devil was granted permission to wreck Job’s life. I have a feeling that now, when God boasts about a chid of his, and the righteous life they live, the devil says nothing. The little voice in his head warns him to remember Job and how that turned out.

But Job’s wife was a different kettle of fish. Job didn’t know about the conversation between God and the devil. Job’s wife didn’t know either but their reactions were so different.

“His wife said to him, “Are you still maintaining your integrity? Curse God and die!”” Job 2:9

I’m reminded of my own “in sickness” issues. Some surprised me in their swiftness and cruelty. Others I knew were headed my way. I never vowed to stay with my husband while the going was good. I never said I’d walk away when things got really bad. “But-if-not” – if there isn’t a complete restoration of all working part – I’m not being given permission to walk away and find an easier life. 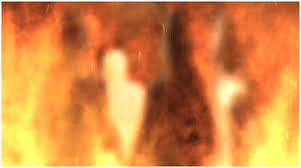 “But look!” he said (Nebuchadnezzar). “I see four men, walking around freely in the fire, completely unharmed! And the fourth man looks like a son of the gods!”

When we walk away, or we fall on our knees before the golden statue to keep the king happy and ourselves out of the fiery furnace; when we gather up our stuff and storm out of the church meeting; when we live with someone’s harmful words echoing in our head: We don’t get to find the man that looks like the Son of God, walking in the furnace with us. All the resources I need to meet the challenge – I possess them.

Who wouldn’t rather be in a furnace with Jesus than in some other safe place where Jesus isn’t there?

A Time to Walk

I will look for the
The hand outstretched
To lift
And the sun that
Breaks through the cloud
To shine
And the man
In the furnace
With me
Posted by meljkerr at 5:28 pm