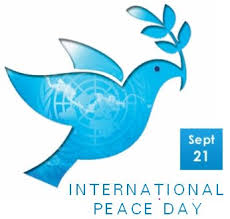 Last night I went to a World Peace Day celebration held at the Breathe Chapel, just off Grant Street in Inverness.  The Breathe Chapel is where our writing group meet and where the River Connections Project have been carving circle poems into stone all week.  It’s a little island of peace in a part of town that isn’t always peaceful.

World Peace Day calls on all warring parties to lay down their weapons and observe a global ceasefire. It’s just for the one day.  If they can stop killing people and the destroying homes for one day maybe they can do it for another and another and another."

Warring parties don’t have about the big wars between nations.  It can be a small scale conflicts – neighbour versus neighbour. And perhaps the enemy isn’t other people but a person’s own personal demons or addictions, or the battle is all about making ends meet.  The weapons don’t have to be missiles but can be fists flying or insults hurled. Killing doesn’t have to mean a body to bury but can be the death of someone’s hope.  Love can be fragile at times.

So, there we were at the Breathe Chapel talking about peace. It was a small gathering.  I only knew one person there.  We had come with poems and prayers, stories and songs to share.

Peace took a battering. A bottle of whisky was pulled out of a duffel bag.  The man was asked very politely to put it away.  He complied but not before taking a swig from the bottle.  It’s possible he had been swigging long before he arrived at the Breath Chapel.

The chapel has been around for a couple of years now.  It is open for people to come and have a time of silence.  It’s a space where people feel the touch of God. There are no rules written down about what you can or can’t do – but then, they are not needed.

Suddenly there was a warring party of one man.  He talked about his house and how he would never lay down the law about drinking in his house.  He thought people should have the freedom to do anything they like anywhere they were.  His house, his rules but this wasn’t his house. He argued himself into a place of no-way-back and left the room. The man with the whisky opted to stay and we continued to share our poems and stories.

We moved on to talk about forgiveness, talking our way through the story of the woman caught in adultery.  When Jesus says that only those who have done nothing wrong can throw a stone, He was challenging them to look at their own lives and realise they were not fit to judge other people.

The man with the concealed whisky bottle mumbled something. He wasn’t the easiest of people to understand.  Eventually he swore himself to silence. Was I just pressing the point about forgiveness too earnestly such that he felt picked on? I don’t know.

I am beginning to think that I’m at a disadvantage when talking to people who are knee deep in the mudslides of life, telling them about the love of Jesus.  I know He loves me, but I have been surrounded all of my life by people who love me.  I know what love looks like. Many of the people I meet in different ministries that I help out at are not like me or have lived my kind of life.

The things that I have done wrong the world would say are small fry. They don’t rank very highly on the badness scale.  A combination of very loving parents, an upbringing in a quiet village, a healthy batch of chromosomes and strong and positive friendships have helped me to turn out to be a nice person. Even with my chances to derail myself with careless decisions and falling into the ditch every so often I have turned out fine.

Perhaps my expectations are too high and I overestimate the power of a poem.  I expect my words to be like a sword thrust to the heart, dismantling the hard shell people build up over the years.  I talk about the love of God and my listener looks clueless.  I say that God sees everything a person goes through and it breaks His heart and I’m looked at sideways. Just what planet do I live on?

The things I have done wrong are not small fry to God.  My sin is in trying to live my life outside of His control.  When I insist that I can do it my way it may not lead me to the bottom of a bottle of whisky but it doesn’t take me to where God wants me to be either. Turning out fine is not good enough for God, only humble surrender to His purpose will do.

“Maybe,” said God, as we picked over the evening, “it’s not about the words you speak, but about just being there and not getting up to leave when they dig out the whisky bottle.  Maybe it’s about listening to the stories they need to tell rather than telling them your own stories they don’t want to hear.  Sometimes the answer you have doesn’t fit the question they are asking.

"And sometimes it does.  Sometimes a person leaves the room but takes the answer with them to ponder."
Posted by meljkerr at 8:18 pm