“Deep joy is found only at the table of thanksgiving.” Anne Voskamp

Yesterday I was told that Jehovah Witnesses have Communion just once a year.  Even then, most of the congregation don’t take part.  It is something that is reserved for those who are part of the 144,000. 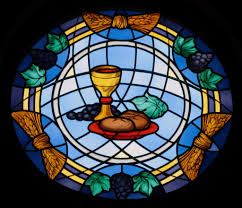 Communion is a kind of re-enactment of the Last Supper.  The words and actions of Jesus are remembered as the bread and the wine are shared among believers.

“He took some bread and gave thanks to God for it. Then he broke it in pieces and gave it to the disciples, saying, “This is my body, which is given for you. Do this to remember me.” Luke 22:19

Once upon a time, in my dim and distant past, I knew and spoke a little Greek. The letters were as familiar to me as any other set of letters.  I can even boast that once upon a time, in that same dim and distant past, I had also learned a little Arabic.  I don’t claim to have a gift for languages.  I swiftly forgot both languages when I stopped using them.

I remember enough to know εὐχαριστήσας has something to do with the word we translate as Eucharist.  I grew up in the Roman Catholic Church. Where other churches might celebrate Holy Communion, we celebrated the Eucharist.   The Greek word “Eucharist” means “thanksgiving”.  The “Charis” bit of the word translates as “grace”.

If you are not allowed to participate in communion does that mean that you don’t have the opportunity to give thanks?  Does it also mean that you don’t have the opportunity to receive grace? From what was said by my friend sharing her experience as a Jehovah Witness, before someone introduced her to Jesus, there’s nothing to be thankful about and there is no grace needed. It’s all about how many doors you knock on, how many magazines you hand out and how many Bible studies you initiate.  It’s about meeting a quota.

My friend talked about two boxes in the Kingdom Hall.  One was for offerings.  The other was for service reports – the amount of doors knocked and the conversations you’d had.  40 hours a month minimum was required by the organisation to prove you were a committed member.  How different might our churches be if we committed ourselves to 40 hours witnessing and evangelism a month – not to prove anything, but because the love of God was so strong in us that we just couldn’t help ourselves!

I have been convicted about this thanksgiving and grace thing – this Eucharist thing.  In some churches perhaps they are so worried about communion becoming an empty tradition if done too often that they fall into the trap of not celebrating it often enough!  I am not sure if the early church kept count of times they broke bread together.  Remembering Jesus and expressing their thanks to Him for their salvation was always at the centre of their fellowship.  I think they probably didn’t allow themselves to fall into familiarity with celebrating the Eucharist.  I think they took great care to keep things fresh and vibrant.  They never got tired of saying “Thank you!”

I realised yesterday that I am having a hard time being thankful.  I appear to have fallen into a pattern of picking fault.  I have put myself into the centre of my universe and if things do not fall the way I want them too, I scowl!

I scowled because a salad I had asked for came with more than half a plate of coleslaw.  I don’t like coleslaw.  I spent my mealtime scraping the mayonnaise off the ham and off the tomatoes.  I’d even said grace before the meal!

The absence of thanksgiving and gratitude robs us of joy. Without joy we are robbed of our capacity to see the things we should be grateful for.

How differently we would all live if we saw the things we should be grateful for and never get tired of saying “Thank you!”