We have just returned from visiting family south of the border. Normally I try to make sure that the house is left reasonably tidy – I wouldn’t want a burglar to complain that I am a lousy housewife. This time however, there were so many jobs about the house, and workmen to do them (or not do them as in the case of the loft insulation because of asbestos fibres) I just didn’t find the time or the inclination. I still don’t have the time or inclination but the house needs to be clean for visitors at the weekend.

It can be quite a hectic time visiting everyone and we NEVER manage to get round everyone. Sometimes it can feel very un-holiday-like and we miss out on just being tourists, so we plundered the box of tourist leaflets at the
B & B.

In all the years of living in Warwickshire, only a couple of months involved driving a car, so I have never really got to know the roads. I confess that I even got lost in the village of Crick where I grew up. There are one or two new housing estates that have sprung up, with a complicated warren of col-du-sacs. My brother in law sniggered as I phoned for directions to his son’s house. Lost in Crick ought to be an oxymoron, but apparently isn’t.

Joe and I headed out to Compton Vereny - “Warwickshire's award-winning art gallery, opened in 2004, delivering an exciting international programme of exhibitions and events in the setting of a Grade 1 listed Robert Adam mansion located in 120 acres of spectacular parkland.” 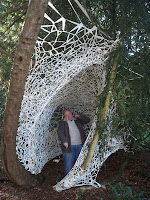 The art exhibitions didn’t just begin once you entered the building and paid for your admission but the” spectacular parkland” contained things too. Art means different things to different people. A giant spider web woven out of raffia might make one person think of art – it made me think of giant spiders!

A current exhibition inside the building was “What the folk say”. Presumably upstairs, where we didn’t go, there is an exhibition of folk art – not your classic poses in the usual medium in ornate frames, but lots of wood carvings and papier-mâché objects. Artists had been invited to take something out of the folk collection and place it alongside of an object or picture in the other collections and then write a paragraph to explain how the two were related. One object might bring out a truth about another object that wasn’t at first glance obvious. Some of the connections they made left you thinking “Oh Yes!” while others left you thinking “Duh?”

There was a huge picture of the battle of Troy and one of the main men involved had taken an arrow to his thigh. He was surrounded by women trying to extract the arrow and bind up the wound. An artist had teamed up that picture with a picture from the folk exhibition where a boxer with a black eye was being tended by his trainer reaching out with a cold flannel. Whether the battle is a big one with a cast of thousands, or a small personal one – injuries happen and people step in to try to help.

Another exhibit from the folk exhibition was a very large bullet. It was made out of metal and had ammunition stamped on it. It wasn’t a real bullet, but a kind of cartoon type bullet. It has been placed in the middle of a room dedicated to portraits of politicians. The artist was drawing the link between war and politics. Even on a non-war level words can be used like bullets to injure people. I have seen glimpses into parliament debates and the way words are used – not just the words, but the tone can be very damaging.

The whole thing was certainly thought provoking. One pair of objects that I found quite offensive involved a wooden carving of the resurrection scene. You could see the crosses in the background and Jesus in the foreground and a few witnesses. The artist had chosen to team it up with a knitted egg cosy. The egg cosy was in the form of a king’s head with a crown and it was placed over the head of Jesus. Yes, Jesus is the King – but the egg cosy over Jesus’ head seemed irreverent in some way. The egg cosy wasn’t even well knitted. What is was doing in the folk collection to start with beats me.

I was thinking of the idea of putting one thing next to another where one object reveals a hidden truth about the other object. That is essentially what a parable is – using the known truth in one story to reveal an unknown truth in another.

Swap the art of objects for scenes from the Bible and just a single word instead of the object from the folk exhibition and allow the imagination to ignite!

See in your mind, perhaps, the Calvary scene of Jesus on the cross, the nails, the blood, the darkness and Jesus’ cry of abandonment. For many people their word would be “death” or “defeat” but God writes a different word – “life” or “victory”.

See in your mind, perhaps, Paul and Silas in a prison at midnight, beaten and bloody, manacles biting into wrists and the sewer smell in their nostrils. What one word would moat people write? Maybe “misery” or “hopeless”, but again God writes something different – “freedom” and “praise”.

Thankfully God doesn’t stick an egg cosy over His thoughts to conceal them!
Posted by meljkerr at 5:11 pm