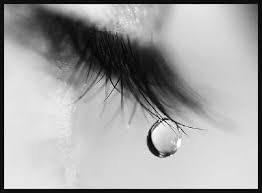 “The word of the LORD came to me: "Son of man, with one blow I am about to take away from you the delight of your eyes. Yet do not lament or weep or shed any tears. Groan quietly; do not mourn for the dead. Keep your turban fastened and your sandals on your feet; do not cover the lower part of your face or eat the customary food of mourners. So I spoke to the people in the morning, and in the evening my wife died. The next morning I did as I had been commanded.” Ezekiel 24:15-18

The Bible contains some incredibly sad stories. I read this one many years ago. It is one of those bits that many people would never know was there unless, like me, they had followed one of those programmes that encourage you to read the Bible through in a year, assigning you a couple of chapters from the Old Testament and a couple from the New each day.

I read it and it broke my heart. It just seemed so unreasonable of God to do that to a servant. It was bad enough that he commanded Hosea to marry a prostitute to get a message across, but this was a different thing. It is hard enough to find the “delight of your eyes” in the first place, that to lose it is harder still.

I haven’t been given a day’s notice regarding my brother’s cancer. The doctors may be thinking in terms of months rather than years of life expectancy, but not days, and not hours.

I have also not been told that I can’t shed tears and I have shed a lot over the last twenty four hours. I haven’t been told to avoid mourners food, so chocolate is still on the menu!

Mike may not be “the delight of my eyes” either, but that doesn’t make it any less traumatic.

I wrote this poem, in response to the story, some five years ago. Trying to capture an emotion that belonged to someone else was a word play exercise. Now I feel it. Now it hurts. Now I wish it was just Ezekiel’s heart and not my own.

The last two couplets are particularly hard. If this is God’s will – it’s not a very nice will, and maybe, dare I say it, He’s not a very nice God to let it happen. Trust is no longer just a word that you casually toss into a conversation but a mountain to climb.

This time you ask
Too hard a task

To take my wife
My heart, my life

My pain, to hide
My grief inside

To you alone
I sigh, I groan

Do as you will
Your plan fulfil

I trust in you
Your will I do
Posted by meljkerr at 12:24 pm

Thank you for this honest expression. It's true, the will of God is not always nice, even when it is always perfect. Trust is a mountain that needs to be climbed.