Not Scotland Not Fair!

I can remember on holiday one year travelling to Paris on the train – the one that goes under the English Channel, through a long, long tunnel. The Euorstar! My husband had been looking forward to the journey for ages. He likes train journeys.

He was rather disappointed that there wasn’t anything to mark the line between when you had actually passed from the English bit of the tunnel to the French bit of the tunnel. I suppose they could hardly have stuck a notice on the side of the tunnel itself that would wisp by in a second and no one would be any the wiser. Perhaps what was needed was an announcement over the sound system. “We are now in France,”

On another holiday to Saltsburg we went into a salt mine. Trailing through the original mine shafts hundreds of feet underground, at one point there was a notice on the wall that we had just crossed the Austrian/German border!

Borders! I have crossed many of them in my life time!

There are no lines along the ground to tell you where one country finishes and another begins. They may be there on a map, but there isn’t a corresponding dotted line that someone had painted across the fields, meandering up hills and through forests.

Of course there are more tangible landmarks like Hadrian’s wall, a little to south of the border, or the Antonine Wall a little bit to the north.

I discovered today another wall! It is the television broadcasting wall. 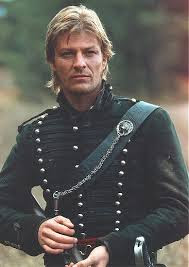 I was very delighted to discover that my hero, Sean Bean, alias Richard Sharpe, will be back on our screens tomorrow. I have fought all those peninsular wars by his side. I have been with him in dingy prisons when he has been betrayed by various baddies. I was by his side when he won the eagle! Sharpe and I go way back!

It was my husband that pointed out the words “not Scotland”. Under normal circumstances this wouldn’t bother me. I know that somewhere in our millions of Sky channels I would be able to track down Sharpe. However, right now we don’t have millions of channels. We just have four. The digi box died last week. It refused to be revived. The Sky man will replace it sometime in mid November!

“Not Scotland” doesn’t apply to all of Scotland. If I lived in Jedburgh, or Melrose, or Dumfries, or Gretna, around about the borders, chances are that I might be able to see Sharpe. I just live too far north and Scottish channels want to show Scottish made programmes.

I just wish that a Scottish newspaper, with a Scottish television magazine, had not taken out a half page article, with a large picture of Sean Bean looking scrumptious, telling me about a programme it isn’t actually showing!