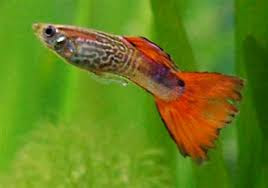 We were talking about pets in work today. I didn’t tell any horror stories about our pet gerbil, Larsson’s Hairband, though one of my colleagues has a daughter who has asked for a couple of gerbils for her birthday!

I told them my fishy tale instead!

I cut my teaching teeth in the east end of London. The last stop on the Victoria line on the underground is Walthamstow. I lived in the nearby district of Chingford, right on the edge of the Epping Forest. Being new to teaching, and new to London, I lodged with a family. It was a big three story house.

The landlady was a social worker. She had separated from her husband and was bringing up a daughter by herself.

This particular daughter had asked for a tropical fish tank for her birthday. She filled it with the usual selection of sunken wrecks, anchors and such like. The fish were guppies. They swam about and looked peaceful.

One particular guppy seemed to get bigger than the others and started to bully the smaller fish. It would quite viciously bite big chunks off fins and tails – or rather, little chunks seeing as they were so small. Little essential chunks. There were even times when the remains of guppies floated on the top of the water.

Now remember the landlady was a social worker! She decided to do something about the bully. She fished him out of the tank with a net and dropped him into a bowl of cold water! It wasn’t freezing cold. It just wasn’t tropical temperatures.

She left him in the bowl, by himself for a week.

Then she returned him to the tank with the rest of the guppies. Perhaps it was that chance the other fish had to grow a little quicker without his bullying behaviour that caused the change, and not the week in solitary confinement. The returned guppy behaved perfectly and gave up him bullish manners!

Telling the story, there is always a ripple of laughter. There is always the sceptic response too. I mean, don’t we all know that fish have a two minute memory? They swim around the tank, see the same scenery, but they just don’t remember they have seen the scenery before. Two minutes and everything is new.

I know what I saw because I was a witness, and yet in telling the tale, I am haunted by the fish’s apparent two minute memory. The bullying guppy could not possibly have remembered the solitary confinement and the cold water!

I have been rescued! Apparently fish are not as dumb as we make them out to be! Granted, some of them may not be the card carrying MENSA’s of the marine world, but they do remember for a lot longer than two minutes!

According to a newspaper article, anything a rat can do in being taught to learn to negotiate a maze and get rewarded with treats for its endeavours, the same is true of a fish. They have been given a bad press.

It makes me wonder about information that we heard somewhere, once upon a time and we – in fishy terms – swallowed, hook line and sinker! What other information do we presume to know as undisputed truth, but it is just isn’t true at all?

Someone once told me, and I believed them, that God was watching me. He had a little black book in which he recorded all of my misdemeanours. Maybe it wasn’t such a little book as I was not angel. I fretted about that book and tried hard to be good. I put myself under intense pressure and eventually cracked up. I could never be that good, so why keep trying?

What a relief it was to discover the truth. There is no black book! Yes, I am being watched, but watched in love. I don’t need to be good enough because Jesus has been good enough on my behalf.
Posted by meljkerr at 10:06 pm