St Francis and I 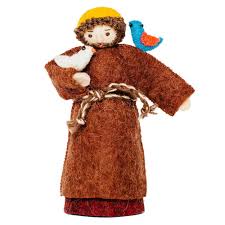 I am beginning to approach the Bible study notes I’m reading through with something approaching trepidation. The book focusses on the life of St Francis of Assisi. We are still into the early days of his faith and ministry and he is all very keen and enthusiastic – and knowing little bits of life already, I don’t think that zeal dampens down or dims any.

In today’s short chapter, Francis listened to a sermon where Jesus sent out his disciples on a mission.

“And he called his twelve disciples together and began sending them out two by two, giving them authority to cast out evil[a] spirits. He told them to take nothing for their journey except a walking stick—no food, no traveller’s bag, no money. He allowed them to wear sandals but not to take a change of clothes.” Mark 6:7-9

He “hurried to make it (what the Gospel was saying) a part of his life”. He got rid of all the extras, chose not to wear sandals at all and made a tunic out of rough scratchy material – just the one.

I doubt if Francis had had access to the internet whether he would have googled Jesus’ instructions, or this one in Matthew’s gospel, as I did this morning.

“Jesus told him, “If you want to be perfect, go and sell all your possessions and give the money to the poor, and you will have treasure in heaven. Then come, follow me.” Matthew 19:21

I tell myself that I am not on a mission, so it doesn’t apply to me. I’m not the rich young ruler who loved money too much, so that doesn’t apply to me either. Why am I so swift to rule myself out? Why are those writers of faith articles so obliging to provide me with justification that says it doesn’t apply to me? Does knowing the proper Greek words and grammar make the argument that it might apply to me more, or less, compelling? I’m not entirely sure that these articles are not written by people who have plenty of money and it’s not in their interests to preach a poverty gospel.

The notes on the study tell me that Francis was not a “passive listener of the Gospel”. And that is what catches my heart. He hurried to make what he had heard a part of his life. He didn’t wrangle with Greek words, or someone else’s perspective. He just found a way to do it.

The very first day of the study began with the “moment when the Holy Spirit overtook young Francis”, the next day’s study talked about hid decision to “conquer himself”. On another day’s study it talked about how “he felt his soul catch fire”. I know myself to have been overtaken by the Spirit but I’m not sure about how much I have succeeded in conquering myself. I think I pretty much do what I feel like doing. Which might not coincide with what God wants me to do. My soul catching fire? It caught fire a long time ago – but it doesn’t burn as fiercely today, perhaps.

All that introspection. What am I doing about it?

I read yesterday of an innate kindness in him. It was an inconsistent kindness. It was also part of a battle in him. Acts of kindness did not give him a sense of having helped someone. He felt more that he had let the side down by being so kind. We all struggle with giving help and who deserves help and who doesn’t. We often think in terms of people getting what they deserve. Francis reached the truth that everyone deserves help. When every act of service, every act of help given, is an act of God’s love demonstrated – we don’t quibble. We just do it.

God told me to have a pocketful of change, easily accessible, when I went down town.  He did not allow me to pass anyone begging without handing them some of the change. He did not give me the time of the space to think the usual thoughts. My part was to give.

St Francis of Assis is certainly setting the bar high. I’m not him and neither do I need to be him. I need to be me, overtaken by the Spirit, conquering myself with His help and feeling my soul catch fire

It’s an every day thing.
Posted by meljkerr at 1:42 pm