I had my eye on the book for a while. Every time I was in W H Smiths, trying not to buy yet another notebook, I had picked it up and read the blurb at the back. Apart from being labelled “magnificent” and “sublime” by the top newspapers, it was also described as “a poetic investigation into what it is to follow a path”. I’d not bought it before because I felt I didn’t have enough time to follow paths. Now I do. My official papers came through the other day confirming that I really had retired from work, how much of a lump sum I could look forward to and when the money would start appearing in my bank account. I’m still not worth mugging or anything.

The book, “The Old Ways – a Journey on Foot” by Robert MacFarlane, appealed to me because since getting the fitbit I have been walking a lot more. MacFarlane combines walking with writing, The premise of the book appealed to me..

The first chapter began with a man standing by a window watching the snow falling. It was winter. He took a whisky flask with him and ventured out. I like the shift from a bottle of water or juice to a flask of whisky – yes, I might try that! 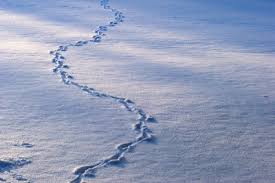 Untrodden snow doesn’t stay unmarked for long in what seemed to be countryside but tuned out to be a golf course. A fox crossed his path. He began to follow and identify the tracks left by various wildlife – deer, rabbits and pheasants. A larger animal loped between trees and his first thought was “wolf” accompanied by a prickle of fear. It was British countryside and no one has yet been granted permission to introduce wolves into the wild, but the brain, at night, on a golf course, with the moon, and the snow, the imagination lets loose.

I wasn’t reading the book in winter. There was no snow. There is a golf course nearby and I have walked around it. The golf course owners had, at one point, planned a nature trail, but it never happened. I remember walking around a golf course in Durban, South Africa. It was relatively new and they were also building houses either on the course itself or near the edges. They were big houses, the kind that only very rich people could afford. I suppose you’d have to be rich enough to be able to replace the windows on a regular basis. Big houses – I was working with a missionary organisation. We were working with an orphanage in a black township. Over sixty children living in the space of a double sized garage. The big houses on the golf course seemed almost offensive. How much land does one person really need?

I thought about the trail I regularly walk – the path that circles the estate where I live. The only evidence of some other life form passing by is litter. Yesterday I walked the path trying to drum up 10,000 steps. There were giggles and laughter just up ahead. I thought at first it was the other side of the burn, someone’s backyard. It hadn’t been a hot day compared with previous days. Not warm enough for paddling pools. It was my side of the burn – four children hanging on various branches of a tree. The tree wasn’t one of the older trees with sturdy trunks and branches, for the most part inaccessible. It was a young sapling and they swayed quite dangerously – four of them in one small tree. It looked fun. Had I been younger…

I remember a sermon a long time ago about Abraham and the trail that he left behind. His landscape was littered with altars and empty patches of grass where his tent once stood. He left behind a testimony to his walk with God. Every altar was a reminder that God was to be praised and consulted. Every patch of empty grass spoke of a sojourner’s heart.

I have to say that as much as I tell people that I have no worries about retirement and how I will use my time, and how I will not miss work – I really feel a little like Abraham called to move into unfamiliar territory. I would like to leave behind me as I pass, a sense of worship and looking to God - not that I don't try to do that anyway - I would like to think that I can uproot myself from a life lived according to bells to one less straight jacketed.
A while ago I was reading the challenge God tossed into Abraham’s life –

“Leave your country, your family, and your father’s home for a land that I will show you. I’ll make you a great nation and bless you. I’ll make you famous; you’ll be a blessing. I’ll bless those who bless you, those who curse you I’ll curse. All the families of the Earth will be blessed through you.” (Genesis 12:2-3 The Message)

I’d always focused on leaving the familiar things behind, the family and friends back home, to go to somewhere new. I am more focused now on “you’ll be a blessing”. It’s not so much the altars or the patches of the dead grass where the tent stood that grips me but whether I can, on a backward glance see the people who I have blessed. Can someone walk in my footsteps and meet people who will say, “Mel blessed me!”?

A better challenge than marking out 10,000 steps.