The Transit of Hermes

I kicked myself out of the house the other day. It seemed that no matter how much I tred to clean the house there were just bits that I had not yet garnered sufficient courage to tackle – so I caught the bus into town.

I sat at a table in the museum café and wrote an overdue letter to a friend. Years back we corresponded for a while. The letters got longer, the envelopes larger and the stamp moved up the weights. It was nice to start over with something small and light.

The art gallery at the museum is always worth a slow walk around. I find that museums don’t tend to hold my attention well, but give me a picture to look at and I get lost in the brushstrokes. That’s not true of all pictures, mind you, and I do have the voice in my head that sometimes tells me “You could do that!”

The particular exhibition, in the Inverness Imag Gallery, is called “The Transit of Hermes” and it appealed to all the senses bar one – I suppose I could have chewed on a piece of straw. 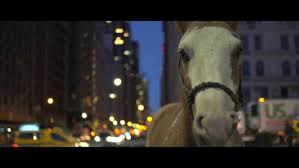 On entering the gallery there was a strong earthy smell. Right in front of me was a pile of hay bales and in front of those were a large screen and projector. I carefully sat down and waited for the show to begin. It was a horse, close-up head and shoulders (?), the background was a city with evening lights and cars trawling along the road. The horse occasionally gave me the eye. The camera panned out a bit and then zoomed back in at a slightly different angle. My sister would have been able to tell me the breed of horse – but it was just a horse, standing still.

“Scottish artist Ross Birrell’s 2017 documenta 14 projects, Criollo and The Athens-Kassel Ride: The Transit of Hermes, including new film and installation works conceived specifically for this exhibition.” – the blurb.

I suppose that as a writer and poet, visiting the houses where well known writers lived and looking at the writing desk where they penned a great novel or an unforgettable sonnet – that ticks a few of my boxes.  As a rider other things tick boxes and this might be one of them.

“The projects were inspired by Tschiffely’s Ride, a 10,000 mile journey from Buenos Aires to New York (1925-1928) by Swiss-Argentine Aimé Félix Tschiffely on two Argentine criollo horses, Mancha and Gato. The criollo horse is a mixture of Arab and Barbary breeds, the name stemming from ‘creole’ with associations of social and cultural mixing.”

The solitary horse on the big screen, the background might not have been just one place but three different places - beside three identical equestrian statues to the Argentine leader, José de San Martín, in Buenos Aires, Washington D.C., and New York. There was a rumbling noise in the background.

The rest of the exhibit consisted of photographs from the Athens-Kassel Ride, a 3,000 km trail through Greece, Macedonia, Serbia, Croatia, Slovenia, Austria and Germany.

The riders were accompanied by a Greek Arravani horse ‘Hermes,’ named by Birrell after the Greek god of border crossings. The Transit of Hermes is the journey of a Greek horse which also becomes a mythical messenger of the Gods, constantly in motion between two worlds.

The journey, as much as it was a literal one was also a heart or a soul journey. The scenery was stunning. There is an endurance aspect to the ride, no doubt. Finding the physical reserves has to be a challenge. Being confronted by such beauty surely has to change someone too.

Not every great journey is 10,000 miles or 3,000 km. Not every journey takes you through mountain scenery. Not every journey involves a horse called Hermes. That doesn’t mean that there’s no endurance needed or physical reserves to draw from. Journeys come in all shapes and sizes. Challenges come in all colours and hues. Sometimes we are called to walk with someone for a while. We learn from each other as we travel together, and then we go our separate ways.

I found this on internet and it is really very nice.
An excellent blog.
Great work!
mybkexperience