The people whose apartments surrounded a courtyard, strangers to one another, drew closer through shared curiosity. Night after night, an English voice in one of the flats could be heard whispering urgently. As they listened, they realised the whispers were prayers. A woman was asking God to heal her cancer-ridden brother, and at times raging at the silence of heaven.

A poem describing these events, by Melanie Kerr, the woman in question impressed me when she read it at a recent HighlandLIT open mic night.

Last month Melanie retired from teaching Religious Education at Millburn Academy, where she helped young people explore the claims of major world religions, encouraging them to keep their minds open to the possibility of a spiritual dimension to life.

Melanie herself is a Christian, a writer of poetry, devotional meditations and short stories. She posts frequently in her blog, and has two books of poems to her name, published by For the Right Reasons. The cost of issuing the first collection, Wider than the corners of the world was met by the church Melanie attended - a lovely way of encouraging her, and her talents.

Many of her poems are religious in theme. Some indignantly highlight social injustices. Melanie has the gift of forging powerful phrases. Someone holding the baby Jesus muses ‘To think that I am holding the God who’s holding me,’; to the terrified refugee child ‘the monsters from under the bed now hunt in daylight.’

We talked, Melanie and I, about the milestones on her journey. The teenager, who had lost her father as a young child, and believed in God, but reckoned she ‘didn’t measure up’ found Jesus inviting her to trust him, promising forgiveness and love.

The young teacher in Cyprus, who knew the Bible intimately, but discovered to her joy that God, through the Holy Spirit, could make faith live in her heart as well as in her mind, dropping thoughts and ideas into her consciousness. Her relationship with God became a lived experience.

The 30-something, taking time out from teaching to come up to Inverness to help a new church grow.  In keeping with the meaning of her name which comes from a Greek word meaning ‘dark’, she has been shy and reserved, a closed book. But she discovered that real change in her personality is possible. The book is opened, Melanie becomes Mel.  ‘Write your tender words in me, wholly new,’ she prays.

The woman, a year or so later, signing up to a writing course, ‘rediscovering the writing side of me’ which she’d left behind in childhood. ‘The sense of coming home, that first lesson!’ she exclaims. 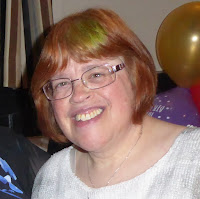 The prayers in that Spanish apartment were not answered as Mel had wished. Her brother died, the second sibling to pass away that year.  At times in our journeys it seems the monsters hunt in daylight, but, Mel has never doubted that she was secure in a loving, divine presence.

The Spanish neighbours ‘wished someone would pray for us the way she prayed for him.’ And they too turned to prayer.

(Kindly granted permission to include the interview from the Highland News)
Posted by meljkerr at 7:49 pm