We’d spent much of the week in Glasgow and it was time to come home. The train ticket was valid for any train, so we opted for an early train. The information screen seemed just a little bit too eager to tell us that the train was cancelled. It wouldn’t help either if we went via Aberdeen, adding another three hours to the journey as that train was cancelled too. Going north was not happening.

The voice over the tannoy assured us that the screen wasn’t telling lies. The train to Inverness was cancelled but that didn’t mean that Scotrail couldn’t get us home. Working with other trains and busses, we could limp home slowly. The first lap was to get to Stirling by the wee train that stopped off at every little station along the way.

Another tannoy voice reminded us at every stop to mind the gap between the train and the platform. We were also supposed to be on the watch for any suitcase that looked suspicious. Our cases were black and anonymous. The contents of one of them counted as suspicious – a week’s dirty washing is never to be trusted. Finally, with regard to our own stuff, we were told firmly to take it all with us – to leave nothing behind.

The next two parts of the journey were busses, from Stirling to Perth, and Perth to Pitlochry. There were no voices to tell us to about the gap between the bus and the pavement, or about seemingly abandoned luggage, or about taking all of our stuff with us – to leave nothing behind. We moved slowly from one bus to another, herded by Scotrail staff in yellow jackets, speaking into walkie talkies.

We were back to trains by the time we hit Pitlochry. It wasn’t a busy train. No one mentioned gaps or lonely suitcases. And no one told us to take everything with us. We shouldn’t have needed to be told but that did not stop us from leaving a walking stick behind. We left something behind!

I turned back to get the stick. It was the end of the journey. The train and the stick were still there. Well, the train was there. The stick wasn’t. It was on its way to the lost property office. The stick and I were reunited just beside the ticket barrier.

This morning I was reading 2 Kings 4.

Feeding a large crowd with a little bit of food – Jesus wasn’t the first to do it. Elisha was given twenty loaves of bread during a famine. He told his servant to share the bread between one hundred prophets and assured him that there would be leftovers. I reckon if they were using Hovis medium sliced bread, they could all have at least one slice, but there would be no leftovers.

They ate, more than one slice, and there were leftovers. I can’t remember whether the servant had to collect the leftovers. Certainly, in the gospel story, the disciples collected the leftovers – twelve baskets worth. Nothing was left behind. Nothing is said about what Jesus did with them. 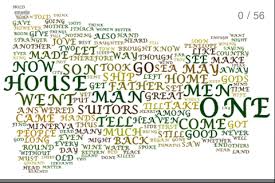 As I was reading the story and thinking about nothing being left behind, my imagination began to stir. I imagined walking into the church meeting hall. Piled up by the door were words. They were just left there. There were a few underneath seats. Had I followed the trail of words there might have been some in the carpark. There might have been a few in the cars themselves. They were just words.

“These are the words that no one thought to hold on to. Some of them slid out of their Bibles. Some fell from notebooks. Most were on people’s laps, and when they stood up, the words fell to the floor. Some words actually made it to the heart, but the listener had other things to think about, and the words were not kept. Some of the words were supposed to be passed on to someone else, but when they met the person that needed to hear the words – well, the words weren’t there. Not every word you hear is for you. It’s for passing on. These are the words that were left behind – they never got passed on,” said God. “There will be more lost words at the end of today.”

It was a powerful image. I admit that I looked around the floor as I came in. I looked carefully beside the door and underneath the seats. I looked very carefully under the seat where I usually sat. There were no physical words to see, but there was in me a determination that this time, this Sunday, this word spoken would not be lost.

God has so much to say to us. God’s words are life giving and creative.We really don’t have the option of sifting through His words and deciding what must be kept and what must be discarded. What is not meant directly for us is meant for someone that we need to tell.

We should leave nothing behind.
Posted by meljkerr at 3:54 pm