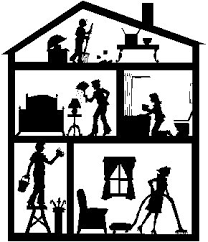 Earlier this week, Joe and I spent time with a friend of our helping her to strip wallpaper from her bedroom wall ready for the expert painters to take over. One wonders about the foolishness of folk in the 1970s and 80s putting up woodchip! It comes off in bits and pieces and leaves the plaster below it with pock marks. I suppose that we should be grateful it comes off at all!

In between dousing the wall with water, and vigorously wielding the paint stripper and maintaining an interesting conversation, it was time well spent and we achieved a healthy patch of naked wall!

It was the tea break and the trip to the toilet that impressed me most. My friend’s house is very tidy! I suppose that when I look at my mess, and my husband’s, I soothe my guilty conscience by reminding myself that I am a busy teacher and active in the church. So is my friend – busier in fact. I think we both arrive at our respective schools at about the same time, but long after I have dusted the whiteboard ink (I would have said chalk but we don’t use chalk any more), the whiteboard ink (is it really ink? What is it inside the container anyway?), the whiteboard ink and locked my door and walked, driven or bussed away home, she is still there. So being busy is not an excuse.

After being at her house for the afternoon – even the wall stripping was done in a tidy manner – for weeks after we do something similar we trail bits of paper around on the bottom of shoes and slippers over the house – coming home to our house I was assailed by the mess. It doesn’t qualify as a tidy mess. If we were a hotel we could have been closed down and fumigated – or just simply closed down and condemned!

I often muse about the untidiness of the house, and less often do anything about it, but this afternoon, I seriously mused! It was inexcusable to put up with all the litter, the unwashed cups, the empty crisp wrappers (no matter how neatly they had been tied into a knot), the newspapers read and abandoned, the piles of Bibles and notebooks and pens (in various stages of used up), the ironing on the spare chair waiting to be done…it is all there and I would probably have not given them much thought had I not seen my friend’s clean house. Her living room, her kitchen, her bathroom – even the bedroom with the half naked wall, all emanated peace and tranquillity. Everything in my house shouts out “Clean me! Wash me! Move me! Iron me!”

It is amazing what we accept as normal until we see someone else’s normal!

Just like the example my friend set in the neatness of her house, I think that the examples set to us by our fellow church family member is essential! Only by being in her house could I see how neat she kept things, only by being side by side with other believers can we be encouraged in our walk. We need to be witnesses to people’s triumphs of adversity. We also need to be witnesses to people failing to triumph too, so that we know “life in all its fullness.” We don’t get that by ourselves.

We get a very skewed view of what normal for being a Christian is all about and only as part of a body can we see what really is normal.

I would like to say that my house is that much the tidier this week – I would like to. It is perhaps a little tidier. Some of the ironing has been done. Most of the papers have been collected and put in the recycling box. The used cups have been washed up (to be used again and left). But I have a picture in my mind about what tidy looks like. Maybe tidy for her looks like one thing and tidy for me looks like another…lets not open that can of worms!
Posted by meljkerr at 10:38 am