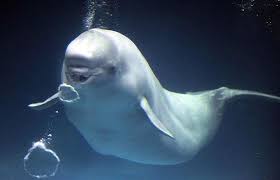 I caught the tail end of a nature programme last week – Nature’s Great Events. The place was the Artic and the events might have been more to do with polar bears, and how they were dealing with the warming up of the oceans and the melting of the ice caps.

In amongst all the struggles of the polar bear, there was a small snapshot of a pod of beluga whales. They look like white dolphins. They have the same shaped face.

Apparently once a sufficient amount of ice has melted, the beluga whales swim into the coastal waters. They have a two week stint when they all gather together. They splash around and stir up the stones and pebbles from the sea bottom. The friction of the stones and the water acts like a defoliator, peeling off the old skin along with all of the wee parasites that have made their home there.

As the narrator said, for those two weeks they “joyfully” frolic in the water!

I am sure you have had moments when it feels like a light bulb has switched on inside! I had a moment of revelation! Just as the beluga whales were stirring up the stones and the water, and shedding themselves of old skin and parasites, I had a picture of what worship ought to be like.

In worship we ought to be stirring something up – obviously not stones on the sea bottom, but something. There is a sense in which we ought to be shedding “old skin”, and “parasites”. I am not sure that I can adequately work out what the old skin and parasites could be. For me the old skin is the tiredness of the working week with all its little niggles. The parasites might be the words that have been spoken, or attitudes and actions of others that burrowed into my heart, sapping my joy and peace.

In so many churches, people are often too passive in worship. We come away from the meeting without having shed the heaviness and the hurts of the week. We leave pretty much unchanged from when we arrived.

The beluga whales were not passive in the artic ocean. Their tales were slapping the water. They were creating waves. They all got involved. They showed an aerial view. There were lots of whales and the water was heaving with white waves.

In worship we need to create a few waves! We need to stir up the water and shed stuff that irritates!
Posted by meljkerr at 8:08 pm