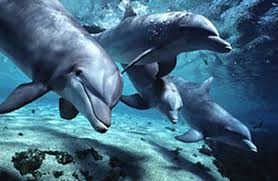 In our mid-week meeting we were praying about our local church – not the church universal, or even the body of Christ in Inverness, but just our small fellowship. We were praying specifically for gifts of the Holy Spirit to emerge and be practised and someone mentioned dreams. It was the desires, aspirations, hopes and dreams thing, but also the night time dream thing – a combination of them both.

Well. I dreamed – the night time dream thing! It wasn’t very inspirational. A couple of friends of mine invited me along to swim with dolphins. There was a really sheltered bay and the water was teeming with fish and there were perhaps half a dozen dolphins, their shiny black backs undulating just above and below the surface. One of my friends had stitched together a swimming costume for me that was a little larger than I was.

I was standing beside the water about to launch myself in when there was an almighty burst of spray. A shark launched itself out of the water and landed just a few feet from me.

Now for most of you that might be totally meaningless, but not to me! Before you start to get yourself concerned that I have been swimming in shark infested waters – a few of weeks ago I watched a nature programme. I say watched in the true sense as the volume was turned down at the time. We were paying a visit to family in Glasgow at the time and my husband and his brother were talking football. TV, satellite TV, repeats stuff ad finitum so I got to see the programme again.

It was about a bunch of lifeguards who decided to swim across the bay. Half way across they were joined by half a dozen dolphins which began to do something curious. They circled around the swimmers herding them closer together. It was frightening for the swimmers because the dolphins were very, very close, flapping fins at them and bumping against them. They kept up the activity for about an hour. Every time one of the swimmers tried to leave the circle they would get chased back in. Just as mysteriously as the dolphins arrived – they left.

It turned out, what the swimmers didn’t know, was that there was a shark. Outside the circling dolphins was a shark attempting to get in and attack the swimmers.

It would appear that what the dolphins did was normal behaviour for them in the sense that is what they do when they have younger dolphins and mother dolphins to protect. They circle them to stop the shark getting in. The shark will not take them all on as they act together. It’s unusual in the sense that they extended their protection to people.

Sharks and dolphins in the same dream led me to thinking about the programme. I suppose in the past few weeks I have felt many areas of my life to be under threat. Who are my dolphins? Who are my sharks? Sharks need not necessarily be people – but in my case I can point to a couple. Sharks are perhaps easy to identify! Who are my dolphins? There is nothing worse than feeling under attack and also feeling that no one is on your side! But I have my dolphins! I have loving and caring people all around me. And I have God!
Posted by meljkerr at 9:41 am