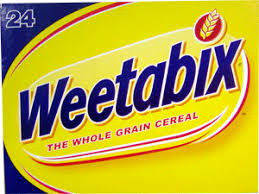 “This is really quite nice!”

These words were said by me, to myself, twenty or thirty years after I had sworn never to to buy, eat, look at, smell, touch or go anywhere near Weetabix!

The problem was Weetabix was the only cereal we ever had at home for years. It took a long time to persuade my mother to start buying Cornflakes as an alternative. And then of course for the next few years it was only Cornflakes. Eventually, we again persuaded mum to try buying Rice Krispies. Thankfully I left home long before I had developed an aversion to Rice Krispies. There was no mixing the cereals.

So for years on end I have never been able to get over my Weetabix and Cornflake phobia! My husband loves Cornflakes and buys the occasional box, but I come out in a cold sweat every time I have to touch the box to move it to get to something behind it!

I bought a pack a few weeks ago. Weetabix have distinctly fewer Weight Watcher points than some of the other breakfast cereals and they also have a low GI rating, which means they keep you filled up longer. So I fought against my Weetabix aversion, slipped two in a bowl, cut up a banana, dowsed it with milk and was quite surprised. It was nice! It wasn’t a case of holding my nose and gulping it down bravely – like I sometimes do with my porridge (which also has few WW points and is low GI). Yes, Weetabix is back on the menu!

I have had an opportunity to visit a number of different churches on a Sunday morning since we began meeting on an evening. The last time that I worshipped in a “denominational” church was probably in the late 1980s. Since then I have thrived, spiritually, on a diet of worship songs, guitar and keyboard music, various school halls, chairs, small congregations and an avoidance of anything that looks remotely like tradition.

Sunday mornings have been a little like re-discovering Weetabix! The things I thought I disliked about “denominational” churches don’t actually exist. Every place I have visited so far has been vibrant and full of life, not steeped and stagnant with tradition and hierarchy.

I still haven’t tried the Cornflakes though!
Posted by meljkerr at 11:57 am

I'm really pleased that you're making the most of these Sunday morning opportunities. It's important that we know the church in our city and that we can appreciate all that God is doing. Well done! ;-)