The last time I created anything in clay was way back some forty years or so as part of my teacher training course. I made a cylindrical vase. It turned out there was a leak somewhere. My mother adopted it and it held her knitting needles. I have inherited both the vase and the knitting needles. The presence of the needles pushed me into rediscovering knitting when I retired. It was only at the weekend that I returned to the clay.

As I have grown older, I have grown less at home with doing messy things. Maybe that’s why I’m such a bad gardener. You can’t play with clay and not get messy. It encourages a person to let go and have fun. Pinnies are a must have.

We sat around a table, a group of ladies letting go and having fun. Everything was there that we needed to be creative. The clay at first was cold and not inclined to play. Clay doesn’t want to be held and warmed, softened and shaped. Telling the clay who was boss was our first task.  In the Bible it tells us that we are clay and God is the potter. How many times does God have to remind us that He is the boss? 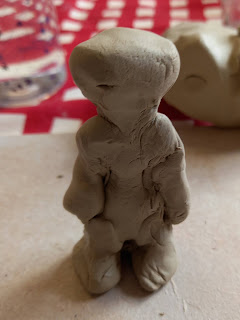 Once the clay had got the message, we made a small man, fashioning arms and legs and a head. When God created people, He never spoke them into being like the rest of creation. He formed them from the dust of the earth and breathed upon them. As He formed them, I think He must have anticipated the fellowship He would have with them. I felt proud of my little man. He might not make it through the fire though. I think that we are less fragile than we suppose ourselves to be- and we have our fourth man in the flames with us.

The next task was to make a vase. The circular base was easy enough to roll out and cut. The wall around it was a bit more challenging. We had ferns and grasses, flowers and thistles to press into the clay and there were plenty of tools to make patterns and write scripture verses. I was plagued with air bubbles. Roughing up the edges of the clay to fit them together reminded me of how people sometimes fit better if they are a little roughed up. Smooth doesn’t always do the job.

In the concentration of creating things in clay, I was aware of friendships being smoothed and shaped too. We knew each other as friends and church family but we learned more about each other in the doing of something. We were quick to praise and encourage each other as we worked. As ever, it amazed me. Give people to same ingredients to work with and what they produce will be individual and imaginative. God loves variety.

The final task was a thumb vase. It was something easier than rolling and cutting out, roughing up and fixing together. I am sure that almost every household has a thumb vase made by a child in school. They have pride of place on a mantelpiece or on a desk. There is so much of me that God is still in the process of making. God treasures what He has created.

The morning was soon over. The things we wanted to keep were placed on boards in plastic crates to dry out. There will be a chance to paint and fire what we have made another day.

I sometimes think that doing something creative, whether it is painting a picture, knitting a sock, writing a poem, growing a garden or making a vase is a powerful way to connect with our Creator.